From time to time – we share some of the more interesting experiences sent in by our readers. Here is one such story . 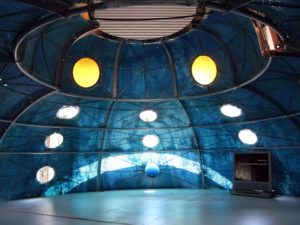 I’ve always been a logical guy – never believing anything I hear, and only half of what I see. But there came a time when things started to change. In 1973 my father had a strange encounter. He awoke in the middle of the night to odd noises, and upon inspection, saw that a circular craft had appeared in the back yard. He went outside and was greeted by what he said were “people” (he made no reference to aliens or beings beyond what we know as human). He claimed he was taken inside the craft and the “people” told him he would not live a long life on Earth. He told the “people” that he didn’t want to leave his family, but the visitors said he had no choice in the matter. My father never said much more about the incident and in 1983 he died of lung cancer at the age of 55. To his day, my mother believes he dreamt the encounter with the “people” and was just sleepwalking. But my dad was never known to sleepwalk, and to add credence to his story was the circular imprint left in the backyard which I remember remained for days. His being told “not a long life on Earth” has since intrigued me, and several years later I began to have strange dreams about visitations from my dad and visions involving alien craft which led to a feeling that he had been recruited for something. The dreams are very vivid, profound, and most always in color (I rarely dream in color). The most vivid came to me in 1986. The following is what I dreamt.

I was attending a party. Everyone seemed to be having a good time, but the room was without windows or wall hangings, rather small and very crowed. No one looked familiar to me. I became claustrophobic and felt out of place. I had the urge to poop so I made my way through the crowd to the only door I could see and entered a bathroom. The room was large. Larger than the party room. The commode was bright chrome and so large that I had to set myself precariously on it to keep my balance. As I finished my business, a huge entryway opened to the side revealing an even larger room, completely white, filled with machine-like gadgets sitting on cubical stand tables. The machines were unrecognizable to me but looked oddly antique in design. The room was very bright and had a giant window to the far end revealing a brilliant blue sky. Outside, strange looking birds of considerable size with multi-colored bills and feathers were swooping toward the glass and then upward into the air. They made no sound. Leaning slightly over and tinkering with one of the machines, dressed in pure white, was my father who had died a few years previous. He straightened, looked at me and smiled. I told him how happy I was to see him. He chuckled and said he had something to show me. He led me to one of the

machines which had a glass dome covering it with a small portal at its base. From this, an orange ticket about the size of a business card was produced with the number 689 printed on it. My father handed me the card saying nothing. I took the card and immediately turned it upside down to notice that it still read 689. I looked at my father and asked him if all this was merely a dream, or some vision of an alternate reality. He answered my question and then I awoke retaining a vivid memory of everything with the exception of his answer.