Watch us on Dimensional Walking – a paranormal journey – on YouTube

THANKS TO
Valentin Petkov unsplash

In 1959 the great space pioneer Dr. Wernher Von Braun commenting on the deflection from orbit
of the US Juno 2 rocket stated: “We find ourselves faced by powers which are far stronger than
we had hitherto assumed, and whose base is at present unknown to us.

More I cannot say at
present. We are now engaged in entering into closer contact with those powers, and in six- or
nine months’ time it may be possible to speak with more precision on the matter.”

Another great pioneer in astronautics, Dr. Herman Oberth, who worked with Dr. Wernher Von
Braun at the US Army Ballistic Missile Agency and at NASA’s George C. Marshall Space Flight
Centre, commented on his hypothesis for UFO propulsion as follows:
“ Today we cannot produce machines that fly as UFOs do. They are flying by means of artificial
fields of gravity.

This would explain the sudden changes of direction. This hypothesis would
also explain the piling up of these disks into a cylinder or cigar-shaped mother ship upon leaving
the earth because in this fashion only one field of gravity would be required for all disks.

They produce high-tension electric charges in order to push the air out of their path and strong
magnetic fields to influence the ionized air at higher altitudes. This would explain their
luminosity.

Secondly, it would explain the noiselessness of UFO flight. Finally, this
assumption also explains the strong electrical and magnetic effects sometimes, but not always,
observed in the vicinity of UFOs.”

For such a leading scientist of his time to formulate such a hypothesis means that a wealth of
observational data was available to him. And not just observational data but hands-on experience
as well when we recall an earlier statement that he made: “We cannot take the credit for our
record advancement in certain scientific fields alone; we have been helped.”

When asked by
whom, he replied, “the people of other worlds.” Also Thanks to Dr. Gary Oldfield for additional information on this post.

Sleep tight — they have been here for a long time – and we are just fine. PS My Dad was on Von Braun’s securty detail at Redstone etc.

This “Galactic Federation” has supposedly been in contact with Israel and the US for years, but are keeping themselves a secret to prevent hysteria until humanity is ready.

NGC 4866, a lenticular galaxy, is shown in this NASA handout provided on July 19, 2013. Situated about 80 million light-years from earth, this image was captured by the Advanced Camera for Surveys, an instrument on the NASA/ESA Hubble Space Telescope(photo credit: REUTERS/EUROPEAN SPACE AGENCY/NASA/ESA HUBBLE SPACE TELESCOPE/HANDOUT VIA REUTERS)AdvertisementHas the State of Israel made contact with aliens?According to retired Israeli general and current professor Haim Eshed, the answer is yes, but this has been kept a secret because “humanity isn’t ready.”Read More Related Articles

Recommended bySpeaking in an interview to Yediot Aharonot, Eshed – who served as the head of Israel’s space security program for nearly 30 years and is a three-time recipient of the Israel Security Award – explained that Israel and the US have both been dealing with aliens for years.And this by no means refers to immigrants, with Eshed clarifying the existence of a “Galactic Federation.”The 87-year-old former space security chief gave further descriptions about exactly what sort of agreements have been made between the aliens and the US, which ostensibly have been made because they wish to research and understand “the fabric of the universe.” This cooperation includes a secret underground base on Mars, where there are American and alien representatives.If true, this would coincide with US President Donald Trump’s creation of the Space Force as the fifth branch of the US armed forces, though it is unclear how long this sort of relationship, if any, has been going on between the US and its reported extraterrestrial allies.But Eshed insists that Trump is aware of them, and that he was “on the verge” of disclosing their existence. However, the Galactic Federation reportedly stopped him from doing so, saying they wished to prevent mass hysteria since they felt humanity needed to “evolve and reach a stage where we will… understand what space and spaceships are,” Yediot Aharonot reported.

READ MOREREAD MOREREAD MOREjavascript:falseSKIP ADAs for why he’s chosen to reveal this information now, Eshed explained that the timing was simply due to how much the academic landscape has changed, and how respected he is in academia.”If I had come up with what I’m saying today five years ago, I would have been hospitalized,” he explained to Yediot.He added that “today, they’re already talking differently. I have nothing to lose. I’ve received my degrees and awards; I am respected in universities abroad, where the trend is also changing.”Eshed provided more information in his newest book, The Universe Beyond the Horizon – conversations with Professor Haim Eshed, along with other details such as how aliens have prevented nuclear apocalypses and “when we can jump in and visit the Men in Black.” The book is available now for NIS 98. While it is unclear if any evidence exists that could support Eshed’s claims, they did come just ahead of a recent announcement by SpaceIL, the group behind Israel’s failed attempt to land a spacecraft on the moon in 2019. Uploaded to social media with the text “Ready to get excited again?,” the announcement contained a 15-second video of the moon with text saying “Back to the Moon,” followed by the date of December 9, 2020. It is likely that this is a follow up to the Beresheet spacecraft, which crashed after engineers lost contact with it just minutes before it was due to land. However, the follow-up project, titled Beresheet 2, is expected to take three years to be ready. But sadly, we may never know the truth.

Slowly the crack – in the NON- human entities cover-up is coming.

As many of you know I am a UFO/Paranormal researcher with a particular interest in human/ alien viruses.

This COVID -19 is a very strange virus or a hybrid of a sort. And it is just beginning and it has many bizarre aspects, some of them will take maybe years to show themselves.

This feeling of dread came over me in December 2019 when I first heard of it in China. It was different, it was very different. My mind hyper-focused on it.

I said to myself was this the one. The one I had been waiting for all my life. Is it the Alien- virus? Will it kill us or will it modify the human race. For sure it’s killing some and the modify part –only time will tell.

Aliens have used viruses over thousands of years to change us. Each person that is infected is given a gift of DNA particles – which some call junk DNA – it’s far from junk.

What are they not telling us ? 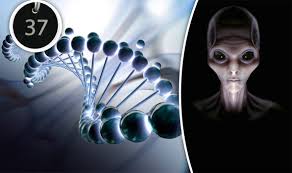