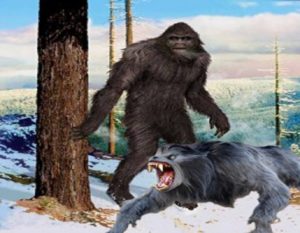 Cryptids have always been in the background in my life experiences even when I worked cattle or packed up the Continental Divide in Colorado. I knew they existed but I always felt our paths wouldn’t cross at least yet. It wasn’t because I was so ignorant and ignored the reality of them, more so that I just wasn’t in that mindset and I truly believe that what we focus on, we intend into our reality. I guess in my younger days, I was dealing with the Medicine Way and understanding the implications of dealing with dark witches, spells, and shapeshifters.

When I met Michael, my fiance, it seemed to be just a matter of time before these creatures started to show themselves. I had an experience with a Sasquatch name Loekey first and then the experience with Tulack, a Dogman who lives in the back area of the Sandia mountains in New Mexico. The day I saw him wasn’t in a secluded area, it was the beginning of a back road that leads to the top of the Sandias.  It was a holiday so there were a lot of people out having picnics or going for family hikes.

Michael and I forgot that it was a holiday but once we started up the winding road leading to the top of the mountains, we decided to stick with our plan to do some vortex photography. I’m sure that in the back of our minds, we never thought in a million years that we would see a Dogman or his companion, a large brown bear. It was just by chance we saw what many have seen in much scarier scenarios.

Our experience started as soon as I got out of the car and started to climb some rocks on the other side of a walkway. I had lost my balance and I was teeter tottering from left to right continually until I got my balance. I was babbling off something to Michael when he yelled,

“Rainbow watch out for that bear!”

I looked in front of me past the road towards a thicket of large bushes and saw massive haunches turning in front of me and the sound of branches being cracked and stepped on as it was running away. I guess almost falling over on the rocks must have scared it. I can only guess.

As I watched the bear run away, out of some trees to the right of it, I saw a very strange and I mean very strange person walking going opposite of the bear. Its stride was like something I’ve never seen especially a normal person do. For every step, it took there must have been 4 to 5 feet in between each step which means that I was looking at something very tall. Its back was hunched over and at first, I thought that maybe he was carrying a backpack. I mean, my mind was going a hundred miles a minute trying to figure out what exactly I was looking at. Then I realized that it wasn’t a backpack but the man’s back. Then I saw how strange the color of the man was. At this point, I had no idea I wasn’t looking at a man. Its color was grey, purple and dark brown. There seemed to be patches of what looked like to me, purple but who knows what I was looking at.

It didn’t turn and look at me but kept at a very fast pace walking down what we eventually saw was a path. I said to Michael how weird this fellow was but he couldn’t see him. I then pointed to the location of where he went and as we walked in that direction, that is when the horrible feeling hit us both in the gut. Something told both of us to stay back. It was a clear message and one I was willing to ignore but not Michael. I wanted to go down the path further but he said it was too dangerous.

I must say, the feeling in our gut was like a slight punch, almost a nauseating feeling. It affected our heart rates and our adrenaline was racing. I could feel my heartbeat all over my body. It was at this point that I decided to take photos in the direction the strange hiker had gone.

It was in one of these photos that we captured what turned out to be a Dogman. He was standing and watching us as we were trying to figure out what to do next. We didn’t smell him at all; he didn’t have an odor any more than the bear did. But I must say, we sure did feel him.

We didn’t know what we had captured until we got home. It was quite the surprise and the beginning of my connection to Tulack, the Dogman.

It’s interesting having a connection with another creature that is not human outside of a Sasquatch. Tulack has relayed interesting information to me, the most obvious is that they don’t think like humans. They understand their place in the forests and they don’t put out their threatening stance to other animals in the forests except when they hunt. As far as how they interact with each other, he stated that they have an understanding with each other. He preferred his solitude and said he particularly didn’t stay with any group but knew where they roamed. He was to me obviously intelligent beyond just a beast in the woods. He distrusted people extremely as do most Cryptids. He didn’t go into more detail than this but I’m pretty sure that what we see on TV with Werewolf movies isn’t even close. Tulack said that he and the large brown bear have been palling around for years. People put human issues and temperaments to other creatures and beings that have nothing to do with them at all.

I think that through the 240 years the USA has been around that Cryptids have had numerous altercations with humans, learning we are a dangerous species. One thing that I want to point out is that a clear mind is better than a pointed gun when walking in the woods. There are those who will say that is ludicrous but I do believe that harmful intent attracts what it focuses on. Cryptids will always be elusive if they know people carry guns, they’ll never see them. It comes down to what kind of interaction a person wants with Cryptids.

As the future unfolds, hopefully, I will have more interactions with both Dogman and Sasquatch.  Time will tell.