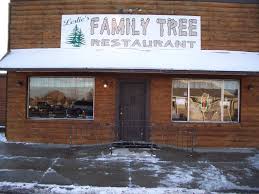 Being a Sci-fi fan and paranormal enthusiast, it’s common a few evenings out of the week, for me to watch Ghost Adventures, Dead Files etc. to get my weekly fix of high strangeness. One evening I was watching the Ghost Adventure guys and to my surprise, they were in Santaquin, Utah filming at a family restaurant. I checked out where the town Santaquin was located from where Michael and I live and it was a short distance away, under an hour.

I enthusiastically told Michael about Leslie’s Family Tree Restaurant and we decided to head out and visit it the following weekend. I called the restaurant to let them know we would be coming and as luck would have it, Leslie the restaurant owner answered the phone. She was a real sweetheart and down to earth kind of gal. We talked a short while and she even told me a few stories of her own experiences. But before I get into the actual haunting and experiences, let me give you some history of the town.

Santaquin was settled in 1851 by Mormon pioneers. There was a war called the Walker war that lasted from 1853-1854. The war started with a confrontation with James Walker Ivie which resulted in the death of several Timpanogos (also known as Ute) tribe members. It had to do with trade interruptions and hostilities between the Mormons and the Native Americans. There were raids and each side retaliated which resulted in the loss of life on both sides. Santaquin was at first named, Summit City but was later renamed in 1856 in honor of the son of Guffich, a local native chieftain friendly to the settlers.

Interestingly enough, the deaths and burial ground of some of the Ute Indians is part of the hauntings of the restaurant since it was supposedly built on a Native American burial ground. But there are other ghosts who for some reason or another have decided to stay within the restaurants familiar walls as well.

Leslie told me about a ghost with a sense of humor who was behind her and said, “Boo!”

She laughed at that one and she also saw a little girl who was emphatically talking to her. It seems as if Leslie is seen as a motherly figure and I can also see that they acknowledge her as the matriarch of the restaurant. Smart ghosts. 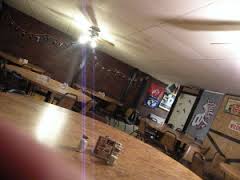 When Michael and I arrived at the restaurant we were greeted by friendly smiles and as we looked around the large room, it was evident by the many photos on the wall that Leslie and her family were leaving a legacy all their own. It was a warm and friendly place but you could feel something, almost like eyes upon you. It could have been all the photos on the wall or maybe some patrons of long ago.

We let some of the wait-staff know we were paranormal investigators and they enthusiastically started talking to us about their experiences. Charlotte, Leslie’s granddaughter came over and volunteered to give us a tour after our meal. I must add here that we really enjoyed our meal. They are known far and wide for their scones and they did not disappoint. Think of them as sopapillas but better!! Their honey butter is to die for! (No pun intended)

As we were eating Charlotte told us about a woman spirit in the women’s bathroom who was sad and heard crying. They believe she is a woman who lost her child to drowning a few streets behind the restaurant years ago. The bathroom at first seems just like any average bathroom and then a little melancholy sets in and it seems to affect the emotions a little and for some a lot. Those who are empathic are impacted more so than those who aren’t. There is also a dark spirit that Zach from the Ghost Adventures tried to agitate from the men’s bathroom. The dark spirit allegedly scratched a visitor on one of the ghost tours the family offers. As far as the episode with Zach commanding the dark spirit to show itself, the likelihood of the dark spirit actually scratching him shown in the episode is pretty unlikely. But those ratings always need a little boost!

We followed Charlotte into another room that used to be a bar but is now used for parties etc. It was really heavy and to me housed most of the spirits that were connected through the illegal gambling which happened down in the basement many years ago. Charlotte said they were able to get the spirits to turn on and off flashlights. She also said that during a voicebox session two names came through, Peter and Henry. Henry for some reason messes with the electronics and they think that Peter is the one talking to them through the flashlight.

The family was told that at any given time they have more than a hundred spirits coming in and out of the restaurant, hanging out or communicating with people. My thoughts on this particular room is that the spirits from the illegal gambling days moved there from down below because the Indians who’s burial ground was inharmoniously defiled are hostile to anyone wanting to stay down there

I also heard there was a vortex in the restaurant and sensed where I thought it was by the party room. There is a bathroom adjacent to the party room with a brick wall painted a dark brown or reddish in color and I asked Charlotte if there used to be a doorway there. She said, “No.” 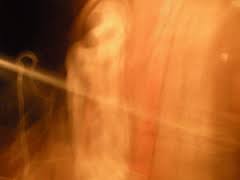 It wasn’t so much a doorway to me but an opening and then it hit me that this was where the vortex is located. You could actually feel the spirits coming in and out through the wall. It made sense to me because the room seemed to be full of spirits that were all talking at the same time, like actually being in a bar or gambling room. At times it felt as if the room was beyond capacity in spirits.

Next we went down to the basement but to get there Charlotte had to open up a wooden door from the floor that once opened revealed steps going down into a very dark room. Stepping into the room was like stepping into an Indian campground. It was like I was at one of the Pueblos back home only this time was with departed spirits. They weren’t happy and I must say that the basement was kind of a mess with things piled in different corners that had been there for years.

I knew immediately why the spirits were upset. Imagine a place where your loved ones were once buried and all of a sudden, someone comes along and builds a structure over their gravesites.

I was greeted by a young Native American who was shirtless, wearing leather pants with long black hair and a small pouch hanging from his neck. I didn’t see a mark on him where a bullet hole would be so I got the impression that perhaps he didn’t die from a gunshot wound. I think he got sick and died from some type of consumption. All in all there were 7 spirits down there that were unhappy. There could have been more but that is who came through to me. They were very unhappy with the mess over their gravesites. I think that the dark spirit that scratched the visitor in the men’s bathroom was probably one of the Native American spirits in the basement.

I told Charlotte that if they cleaned it up and paid homage to the spirits who were buried there, that the energy would be lighter, better and they would be happier. I suggested a Remembering Blessing that the family members could do to appease the spirits and let them know they are not forgotten. To be forgotten for many of us is worse than death but if you are dead, feeling no one cares or knows about your plight, it could be a prison of inconsequence.

Amy Allan from the Dead Files commented that Leslie would need representatives from many religions to do a ceremony to help appease the spirits at the restaurant. Leslie told me on the phone it was basically impossible and I agree with her. To advise this is a set up for failure. How can anybody possibly do this? Not many people have the time or ability to find such a large group.

What I feel needs to be done is simpler. A Medicine Man from the Ute tribe and a Bishop from the Mormon faith need to come and do a Blessing of the Spirits. An intermediary such as an empath or healer who is not from either group would stand between the Bishop and Medicine Man. From the Medicine man I see a pouch of prayers being offered. From the Bishop a written Blessing. If both representatives could do the ceremony, the hostility would dissipate and there would be a lighter feeling down in the basement and throughout the restaurant. Remembering the Dead once a year is a good way to let them know they are not forgotten.

At the end of our tour, we said good-bye to Charlotte and felt we had just made a new friend. To Leslie and her family, we would like to thank you for your gracious hospitality and to the spirits of Leslie’s Family Tree Restaurant, rest assured, you are not forgotten.