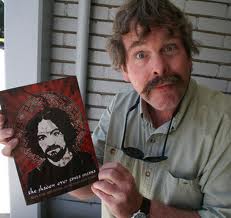 We have had different types of speakers at the forum here in Albuquerque, but never a speaker who could so skillfully weaves humor and fun into this strange and something creepy subject matter. Adam Gorightly has called himself a certified “crackpot historian”, of the 23rd degree Discordian (look it up). His articles have appeared in numerous publications, such as The Excluded Middle, UFO Magazine, Paranoia, SteamShovel Press, Four Two Four. He is the author of four wild and very entertaining books, and he has been a guest on many talk radio shows.

So to say the least we were enchanted here in New Mexico to get this ranting, profound speaker to come and hang here with us on a lazy Saturday afternoon. Adam talked with us on many subjects and kept the meeting on a lively edge.

Adam moved from subject to subject like a spider connecting his web. So here is some of Adam’s wisdom– UFOs and other cosmic experiences have presented themselves in waves/peaks throughout history and will continue in an established pattern for many years to come. Next Kenneth Grant had an amazing contact experience with a Sirius Being called Lim and Lim is continuing to channeled today by two other individuals. Lim in the end could be judged one of the most profound alien beings to ever communicate with humans (my comment). Then there were his (Adams) wild and crazy dreams and the LSD experience that kept us all wanting more. As a kid he had a vivid dream, although I feel probably a real cosmic experience. The dream about him camping outside and a mothership comes over the area and the next thing he remembers is a tap on his shoulder (by an Alien).

And there was much more from Adam,about Jack Parsons and L Ron Hubbard two of the most interesting characters on earth and friends to boot. And of course Aleister Crowley had to be mentioned here, there are some who call him the most Evil Man on Earth, and others call him the smartest guy on earth. In reality there is a fine line between the two.

Adam thanks for the ride, and quoting from his BIO. “There are few answers to Adams rants, but they pose questions only the brave or seriously warped would dare ponder “– I love it

Sleep Tight, maybe next week you will run into an Adam type and make you smile.