Crop Marks recently came to my attention for the first time. At first I thought they were misidentified Crop Circles, but maybe, just maybe, there is a strange relationship between the two different concepts.

First, Crop Marks are lines in fields that appear during unusually dry summers in England, and I suspect in other parts of the world where ancient structures lie under a shallow layer of earth. In England there are many ancient forts and buildings that are now under fields of crops. Planes that were watching for crop circles noticed these similar lines in the crops were actually outlining forts, walls and foundations of these ancient structures. The depth of the moist earth is minimized over the structures so that during dry periods the crops over these areas whither and sometimes die, forming lines, sort of like a Nazca line village.

These crop marks have uncovered a lost beach where archeologists feel the Romans first landed to invade and conquer the British Isles 2000 years ago. Over two hundred ancient important sites have been found through Crop Mark sightings. This year has been an amazing year for these Crop Marks; England has experienced one of the driest summers since 1976, and so has had a bumper “crop” of Crop Marks.

1976 was also an amazing crop circle year on sheer volume, though not as complex as they are today, but large and very impressive for that time frame. And Crop Circle and Crop Marks lie close together in quite a few cases. I believe this relationship is because the ancient ones of the British Isles built near the ley-lines, which intersect in vortex areas. These vortex/ley-lines areas have also been drawn through the dimensional veil by the Circle Makers and their beautiful Crop Circle formations.

You can quote me on this: since this year has been a banner year for Crop Marks, this will also be a glorious year for Crop Circles. The messages this year may tell us our immediate future, and we need to see and perceive them through our right brain. So don’t think it – feel it. You will feel hope or despair and you will know if our journey will end or continue here on this little fragile planet.

Sleep tight, the Circle Makers are at work – designing the art form of universal consciousness. 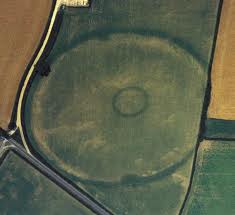