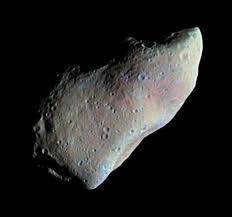 Jun 25, 2011; 5:02 AM ET
On Monday, around 1:00 PM EDT, Asteroid 2011 MD is expected to pass less than 8,000 miles from Earth. The asteroid is expected to be able to be viewed in parts of the Southern Hemisphere, including some of Antarctica, Australia, New Zealand and South Africa.
The asteroid was first spotted by the Lincoln Near-Earth Research Project on June 22.
Experts says there is no chance that the asteroid will hit Earth on this approach, and almost no risk at its next close approach in 2022. If the asteroid did strike, it would probably explode in the upper atmosphere and would harmless to us here on the surface of Earth.
This may be the largest known asteroid to approach this close to Earth, but we have only been monitoring close asteroid passes since the the 1990’s. Without a doubt, asteroids as large or larger have passed this close or closer before then.
The asteroid will be very hard to observe after its closest approach, since it’s departing more or less toward the Sun.