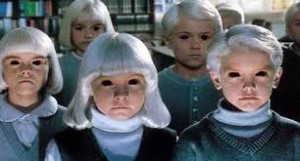 As a researcher for the last 40+ years one of the areas of the paranormal I have been involved in is the study of Men in Black. Most of my research came during alien abduction research. Normally it was a typical story where after an encounter with something paranormal, the guys with very pale skin and black suits visited the victim to threaten them to keep quiet about their UFO visitation.

I personally had an encounter which got my attention, but I was surprisingly able to keep my cool and totally confused the MIBs into leaving my home.So about 5 years ago I started hearing about these Black-Eyed Children and their visitations, sort of like Children of the Corn stuff, and at first I thought this was just a sci-fi carryover working on people’s minds and creating these encounters. But as I read more and more about it I was convincing myself of its reality. Recently I read a book about these beings by a guy named David Weatherly, and I started taking the subject a bit more seriously.

The common experience that has developed is two BEC children knocking on the door and asking to come in. They use excuses such as, “I need to use the phone…we are cold and need to warm up…our mother is worried,” etc. Their appearance is of one older and one younger child, possibly siblings, who are dressed quite normally, but have very pale skin and those amazing solid midnight-black eyes – hence their name, Black-Eyed Children.

These BECs seem to strike fear in people during their initial encounter “asking the human to be allowed in” to their house. Interesting that if it wasn’t for the jet eyes and their strange monotone talk, more would probably get into people’s houses, like home invasions. I would assume some BEC have gotten into people’s houses, but the results of these very close (in the house) encounters are not known. I would expect that the elderly would make prime targets. The BECs are a scary lot, but like the MIBs, encounters with them are very survivable as long as you face them without FEAR. Your mind will save you in the moment.

Sleep tight, if there is a knock think twice…