Information from: The Pueblo Chieftain, http://www.chieftain.com

SAN LUIS, Colo. (AP) – A creepy string of calf mutilations in southern Colorado has a rancher and sheriff’s officials mystified.

Four calves were found dead in a pasture just north of the New Mexico state line in recent weeks. The dead calves had their skins peeled back and organs cleared from the rib cage. One calf had its tongue removed.

But rancher Manuel Sanchez has found no signs of human attackers, such as footprints or ATV tracks. And there are no signs of an animal attack by a coyote or mountain lion. Usually predators leave pools of blood or drag marks from carrying away the livestock.

Two officers from the Costilla County Sheriff’s Office have investigated the mutilations but say they don’t know what’s killing the calves.

“There’s nothing really to go by,” said Sanchez, who’s ranched for nearly 50 years. “I can’t figure it out.”

A spokesman for the sheriff’s office told The Pueblo Chieftain that investigators doubt a person butchered the calves because there is no blood at the scene.

“I’ve butchered a cow before and I know what kind of a mess it leaves,” Sgt. James Chavez said.

Some in the area believe the mutilations are the work of aliens. An area UFO chaser, Chuck Zukowski of Colorado Springs, has been to the Costilla County pasture to investigate.

He told the paper there have been other unexplained calf mutilations in the area, including three in March. One of the other calves, found dead on a ranch near Trinidad, had its ears removed, Zukowski said.

“We’re trying as much as we can to find a pattern,” said Zukowski, who runs a UFO Web site called ufonut.com.

Sanchez said he has sold off his 32 remaining calves out of fear more would be mutilated. He hasn’t decided how he’ll manage the remaining 40 animals in his herd.

“It’s a big loss for a small rancher,” he said. 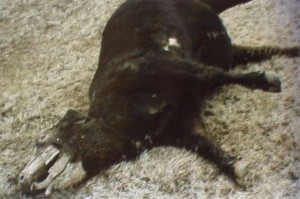 One Reply to “Are the Mut Makers back in Colorado?”