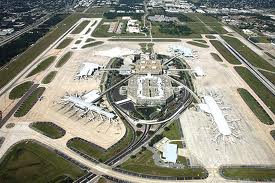 A high school friend of mine recently told me about something strange he saw at the Tampa International Airport. The Federal Aviation Administration (FAA) told the airport that they needed to adjust the runway signs since the compass points were significantly off due to the magnetic North Pole shifting position.
What is going on here? Is the magnetic pole shifting unusual? Is the shifting related at all to the strange bird and fish deaths that have been reported recently? The answer is probably no to both questions. According to Al Blasko, senior graphic artist here at AccuWeather (who drew the graphic below) and is also a huge astronomy fan, “the magnetic North Pole shifts all the time. Sometimes it is a temporary shift and sometimes semi-permanent. It can shift up to hundreds of miles in a short time and then shift back almost to where it was just as fast. It is a very unpredictable phenomena.”
The FAA told Tampa International that, on average, the magnetic North Pole is shifting 40 miles per year towards Russia. According to FAA spokesman Paul Takemoto “You want to be absolutely precise in your compass headings. To make sure the precision is there that we need, you have to make these changes.”

FAA spokeswoman Kathleen Bergin chimed in “Aviation is charted using latitude and longitude and the magnetic poles. And since the Earth’s poles are changing constantly, especially when they change more than three degrees of latitude or longitude, that can affect runway numbering.”
In the near future, two other runways will need to be adjusted in Tampa. It is not known whether other U.S. airports will have to adjust their compass points as well, though I would not be surprised if some do.