Darla has a dear friend named Bonnie, who comes from a fairly wealthy family in southern Georgia. Bonnie’s family property is bordered by Jimmy Carter’s Family peanut farm. Of course we all know President Carter publicly admitted seeing a UFO. Jimmy’s sighting I believe was before he became President (a little like a Dennis Kucinich event). Note–if Dennis was within the magic 300 feet of the being or craft, he was abducted. I plan on asking him the next time I see him, just to set the story straight.

Bonnie spoke of some very interesting sightings on her family farm in Georgia. There were some amazing lights in the woods in the direction of the Carter peanut plantation. This was a weekly event that all her family would expect and enjoy. There were at least three daylight sightings of disks that several members of the family had witnessed during her childhood on the farm. They had farm animals that were allowed free range on the property, but they never wandered toward the wooded area where the lights and the disks were sighted.

In part 10, I spoke of Darla and Bonnie’s sighting (probably a close encounter) in the Atlanta area. Through my research I have concluded that if a person has a close encounter/ abduction experience they are given a heighten ability to see disks and other Alien craft for the rest of their lives. I have been told that sometimes even with groups of random people, for example on a beach or a gathering at an outdoor sporting event, that only a few people in the crowd can see/witness a large UFO even though only a blind man could not.

So the question is do Bonnie, Darla, Jimmy and Dennis all have the gift or curse to see the UFOs– have they been connected?

Enjoy, Sleep tight, our Government is watching over you. 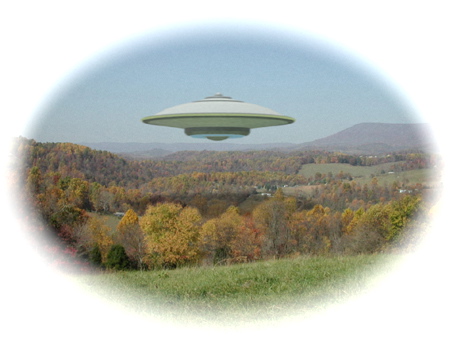 Over a field in South Georgia ?