( my personal comment– lets all hope our Space alien friends don’t decide to pull one or both of these objects into our orbit – all hell would break -loose. MWiz)

In an unprecedented event for astronomers, two asteroids will swing past the Earth Wednesday at a distance closer than the moon.

The two asteroids, which will not be visible to the naked eye, were only recently discovered by astronomers with the Mount Lemmon Survey in Tucson, Ariz. They are in different orbits with close passes that will come nearly 11 hours apart. While scientists say neither threatens to strike the planet, the two space rocks do provide a challenging skywatching opportunity.

Other asteroids have been known to make such close passes, but it is rare for two to be spotted zooming in at the same time. Because of the asteroids’ movement, finding and tracking them across the sky will be a challenge for seasoned skywatchers. [Image Gallery: Asteroids]

Asteroid 2010 RF12 is a small space rock, estimated to be between 19 and 42.6 feet (5.8 to 13 meters) wide, according to NASA’s Near-Earth Object Program at the Jet Propulsion Laboratory in Pasadena, Calif.

As the asteroid swings by our planet and gains speed, it should also brighten, but it will still be very hard to spot, astronomers have said. Its closest approach will be at 5:18 p.m. EDT (2118 GMT) on Wednesday.

“But by then it will be difficult (to see) from any location on Earth,” said Richard Miles, director of the Asteroids and Remote Planets Section at the British Astronomical Association.

This larger asteroid “should be able to be followed to within about 6 hours of closest approach,” Miles said in a statement. NASA asteroid trackers said the closest approach of 2010 RX30 will be Wednesday at 5:51 a.m. EDT (0951 GMT).

In telescopes, 2010 RX30 should be visible all night between Tuesday and Wednesday but could be tricky to spot as it crosses the sky at a swift pace.

Magnitude is a measure of how bright an object in the sky is, with lower numbers corresponding to brighter objects. Anything magnitude 6.5 and above is not visible to the naked eye.

“As seen visually in a large telescope (30-cm aperture or more), its motion across the sky would be very apparent in real time,” Miles wrote.

Using a network of telescopes on the ground and in space, NASA experts and other astronomers routinely track asteroids and comets that may fly uncomfortably near the Earth.

The space agency’s Near-Earth Object Observations program is responsible for finding potentially dangerous asteroids and studying their orbits to determine if they pose a risk of hitting the Earth.

* Original Story: 2 Asteroids to Pass Earth Closer Than the Moon 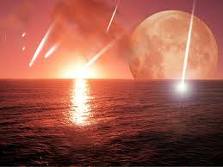