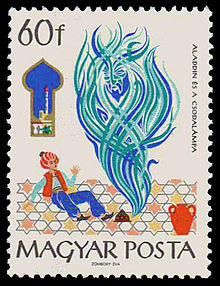 Djinn are spiritual creatures in the Islamic and the Arabic world. The word Genie is the Latin word meaning genius, as a guardian spirit assigned to each human at birth. The Djinn are mentioned in the Quran in numerous places saying they are beings of smokeless and scorching fire. According to the Quran, the Djinn, Angels and Humans were the three beings God created. The Humans and Djinn have free will, but Angels don’t; they are bound to the direct will of God. So Humans and Djinn can be good, evil or neutrally benevolent.

It is important to mention that in Islam it is believed that after creation the Djinn refused the demands of God (Allah) and were banished from paradise and named Shaytan or Satan. Djinn for the most part are invisible to man, but Djinn can always see man. When seen, the Djinn can appear in many forms, such as with wings, and as snakes, dogs, dragons and humans. Djinn as a general rule don’t like mankind and feel humans have had special favor from God and were given this beautiful planet called earth, which they want for themselves. They have been trying to disrupt human progress for thousands of years.

I believe as time goes by, we UFO/Paranormal researchers will start embracing the concept that Djinn are some of the creatures that have been causing humans ill luck and straight out harm. Some of the beings I am thinking about are fairies, other forest beings, dogmen, and various other ET types. If humans are not careful the Djinn can slip into a human and process them. I have studied one Djinn-like being called a shadow person, a black humanoid silhouette that is tall with no facial features and sometimes with a hat. These Djinn will mostly just stand and look at you at night and drive fear into your heart. Their purpose is to make you leave the area (house, etc.) which they believe is theirs. If you show fear and don’t confront them they win.

Sleep tight, as I always say fear makes you small and being fearless makes you large, and it keeps the Djinn at bay.

2 Replies to “Djinn or Genies, More than Just Wish Givers -Is it all True Series # 317”