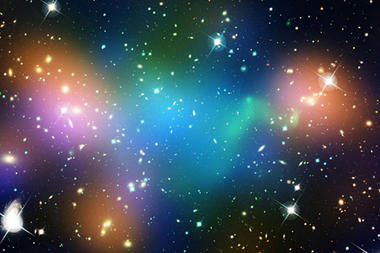 By Ray Sanders, Universe Today / March 2, 2012
Galactic collision creates mysterious ‘dark core’
Images captured by the Hubble telescope reveal a mysterious clump of dark matter thought to be left behind after a massive galactic collision. But this dark matter isn’t behaving in the way scientists expect dark matter to behave.
This composite image, captured by NASA’s Hubble Space Telescope and the Canada-France-Hawaii Telescope in Hawaii shows the distribution of dark matter, galaxies, and hot gas in the core of the merging galaxy cluster Abell 520, formed from a violent collision of massive galaxy clusters.

Astronomers are left scratching their heads over a new observation of a “clump” of dark matter apparently left behind after a massive merger between galaxy clusters. What is so puzzling about the discovery is that the dark matter collected into a “dark core” which held far fewer galaxies than expected. The implications of this discovery present challenges to current understandings of how dark matter influences galaxies and galaxy clusters.

Are you scientifically literate? Take our quiz
Mysterious invisible galaxy may be composed of dark matter
Scientists unveil biggest ever map of universe’s dark matter
Topics
Astrophysics Physics Astronomy Sciences Dark Matter Cosmology
Initially, the observations made in 2007 were dismissed as bad data. New data obtained by the Hubble Space Telescope in 2008 confirmed the previous observations of dark matter and galaxies parting ways. The new evidence is based on observations of a distant merging galaxy cluster named Abell 520. At this point, astronomers have a challenge ahead of them in order to explain why dark matter isn’t behaving as expected.

“This result is a puzzle,” said astronomer James Jee (University of California, Davis). “Dark matter is not behaving as predicted, and it’s not obviously clear what is going on. Theories of galaxy formation and dark matter must explain what we are seeing.”

RELATED: Are you scientifically literate? Take our quiz!

Current theories on dark matter state that it may be a kind of gravitational “glue” that holds galaxies together. One of the other interesting properties of dark matter is that by all accounts, it’s not made of same stuff as people and planets, yet interacts “gravitationally” with normal matter. Current methods to study dark matter are to analyze galactic mergers, since galaxies will interact differently than their dark matter halos. The current theories are supported by visual observations of galaxy mergers in the Bullet Cluster, and have become a classic example of our current understanding of dark matter.

Studies of Abell 520 are causing astronomers to think twice about our current understanding of dark matter. Initial observations found dark matter and hot gas, but lacked luminous galaxies – which are normally detected in the same regions as dark matter concentrations. Attempting to make sense of the observations, the astronomers used Hubble’s Wide Field Planetary Camera 2 to map dark matter in the cluster using a gravitational lensing technique.

“Observations like those of Abell 520 are humbling in the sense that in spite of all the leaps and bounds in our understanding, every now and then, we are stopped cold,” said Arif Babul (University of Victoria, British Columbia).

Jee added, “We know of maybe six examples of high-speed galaxy cluster collisions where the dark matter has been mapped, but the Bullet Cluster and Abell 520 are the two that show the clearest evidence of recent mergers, and they are inconsistent with each other. No single theory explains the different behavior of dark matter in those two collisions. We need more examples.”

The team has worked on numerous possibilities for their findings, each with their own set of unanswered questions. One such possibility is that Abell 520 was a more complicated merger than the Bullet Cluster encounter. There may have been several galaxies merging in Abell 520 instead of the two responsible for the Bullet Cluster. Another possibility is that like well-cooked rice, dark matter may be sticky. When particles of ordinary matter collide, they lose energy and, as a result, slow down. It may be possible for some dark matter to interact with itself and remain behind after a collision between two galaxies.

Another possibility may be that there were more galaxies in the core, but were too dim for Hubble to detect. Being dimmer, the galaxies would have formed far fewer stars than other types of galaxies. The team plans to use their Hubble data to create computer simulations of the collision, in the hopes of obtaining vital clues in the efforts to better understand the unusual behavior of dark matter.

If you’d like to learn more about the Hubble Space Telescope, visit: http://www.nasa.gov/hubble

Ray Sanders is a Sci-Fi geek, astronomer and space/science blogger. Currently researching variable stars at Arizona State University, he writes for Universe Today, The Planetary Society blog, and his own blog, Dear Astronomer. Be sure to follow via the links below for more of Ray’s posts!