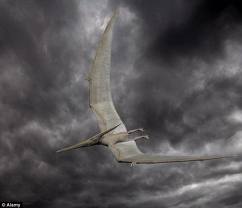 Please read Part 1 posting from 09/29/12 and Part 2 posting from 10/13/12. Central and South America have many giant bird stories. Many of these birds reportedly have wingspans of well over 30 feet and beak to the tail upwards of 12 feet.
One story out of Panama was of a 21-year-old who had a close encounter in his backyard while feeding his dog. He heard a large branch snap in a nearby tree and this huge bird, nearly 12 feet tall with a hooked beak landed in front of the young man. They stared at each other and then it suddenly left in a big gust of wind.
In the middle 70’s there was a vampire legend in Puerto Rico. These strange winged creatures were appearing everywhere on the island. These giants looked like pterodactyls. One encounter in 1975 a man saw a large bird creature in a tree near his house. He quickly ran inside for safety. The creature then landed on the man’s roof and hung there for about 10 minutes and finally took off. These Puerto Rico giants would occasional grab a chicken or two during their flights and they give out a very large strange noise.
There were other descriptions of these giants with dense plumage, a thick neck, and piercing eyes. And the strangest feature was a wolf–like muzzle, instead of a beak. These sightings went into the 1990’s.
There was another special event that came along with the bird sightings – time warp/lag. Everything around the giant encounter was in slow motion until the bird’s presence left the scene.
I had one more personal experience; I lived at about 8500 ft. in the Wasatch Mountains in Utah. One day I was on the front porch sweeping the leaves off, and in the distance I saw what looked like a small plane flying quite low in the sky. But as it got closer I noticed it was a huge bird flapping its wings and it was coming directly toward my house. And as it got over our house it dumped enough bird poop to fill a Home Depot 5 gal bucket – which coated the front of our house; it was steaming hot but I quickly hosed it down.
Sleep tight – If you wake-up with something white coating your house, you can blame the giant winged beasts.
MWiz.