A recently published Harvard University meta-analysis funded by the National Institutes of Health (NIH) has concluded that children who live in areas with highly fluoridated water have “significantly lower” IQ scores than those who live in low fluoride areas.

In a 32-page report that can be downloaded free of charge from Environmental Health Perspectives1, the researchers said:

“A recent report from the U.S. National Research Council (NRC 20062) concluded that adverse effects of high fluoride concentrations in drinking water may be of concern and that additional research is warranted. Fluoride may cause neurotoxicity in laboratory animals, including effects on learning and memory…

To summarize the available literature, we performed a systematic review and meta-analysis of published studies on increased fluoride exposure in drinking water and neurodevelopmental delays. We specifically targeted studies carried out in rural China that have not been widely disseminated, thus complementing the studies that have been included in previous reviews and risk assessment reports…

Serum-fluoride concentrations associated with high intakes from drinking-water may exceed 1 mg/L, or 50 Smol/L, thus more than 1000-times the levels of some other neurotoxicants that cause neurodevelopmental damage. Supporting the plausibility of our findings, rats exposed to 1 ppm (50 Smol/L) of water-fluoride for one year showed morphological alterations in the brain and increased levels of aluminum in brain tissue compared with controls…

In conclusion, our results support the possibility of adverse effects of fluoride exposures on children’s neurodevelopment.

Future research should formally evaluate dose-response relations based on individual-level measures of exposure over time, including more precise prenatal exposure assessment and more extensive standardized measures of neurobehavioral performance, in addition to improving assessment and control of potential confounders.“

There are so many scientific studies showing the direct, toxic effects of fluoride on your body, it’s truly remarkable that it’s NOT considered a scientific consensus by now. Despite the evidence against it, fluoride is still added to 70 percent of U.S. public drinking water supplies.

It amazes me that the medical (and dental) communities are so stubbornly resistant to connect the dots when it comes to the skyrocketing increase of cognitive decline in adults, and behavioral issues in children (ADD, ADHD, depression and learning disabilities of all kinds). In fact, there have been over 23 human studies and 100 animal studies linking fluoride to brain damage3. Fluoride can also increase manganese absorption, compounding problems since manganese in drinking water has also been linked to lower IQ in children.

Reported effects of fluoride on your brain include:

Six Facts You Need to Know About Water Fluoridation 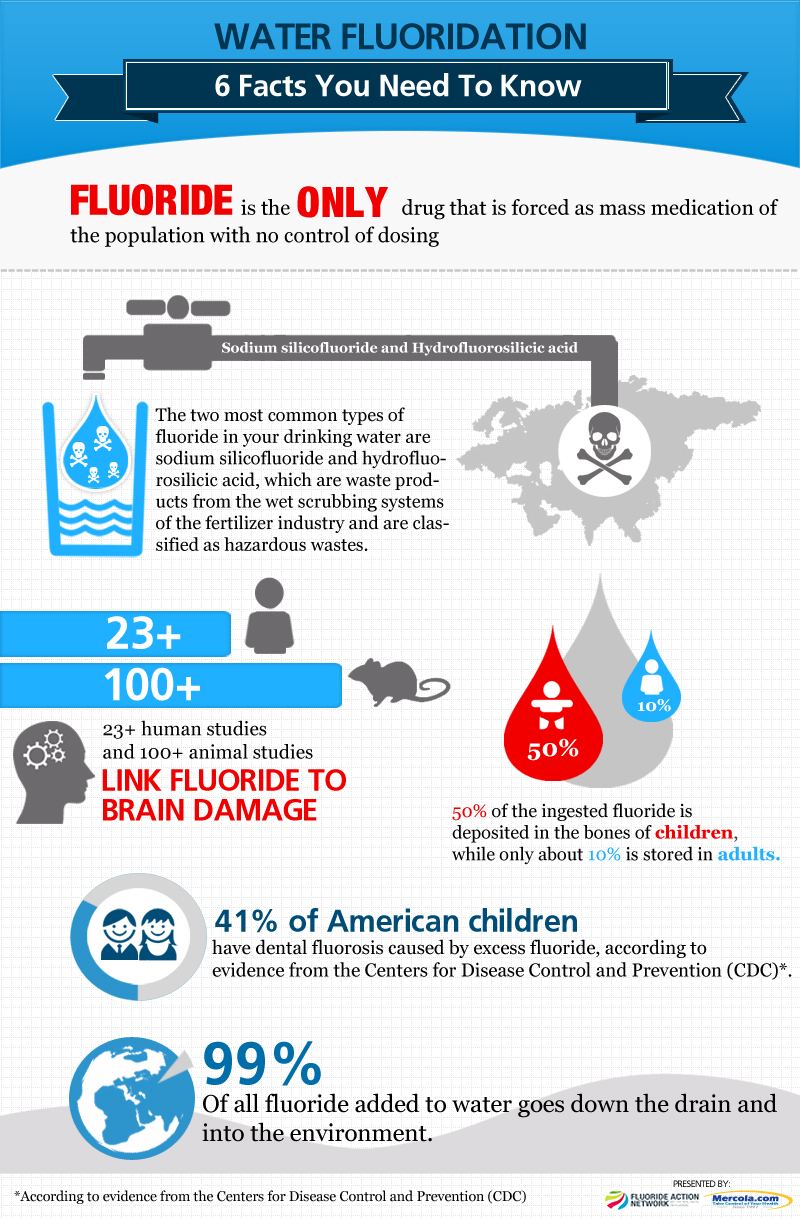 Harmful Effects have Been Known for Half a Century…

What is perhaps most surprising is that the harmful effects of fluoride have been known by conventional medical organizations for over half a century. For example, the Journal of the American Medical Association (JAMA) stated in their September 18, 1943 issue that fluorides are general protoplasmic poisons that change the permeability of the cell membrane by certain enzymes. And, an editorial published in the Journal of the American Dental Association, October 1, 1944, stated:

“Drinking water containing as little as 1.2 ppm fluoride will cause developmental disturbances. We cannot run the risk of producing such serious systemic disturbances. The potentialities for harm outweigh those for good.”

Part of the problem is that it’s an accumulative toxin that, over time, can lead to significant health problems that are not immediately linked to fluoride over-exposure. In a 2005 paper entitled “Fluoride—A Modern Toxic Waste,” Lita Lee, Ph.D. writes4:

“Yiamouyiannis’ book, “Fluoride, The Aging Factor,” documents the cumulative effect of tissue damage by fluoride, commonly seen as aging (collagen damage), skin rashes and acne, gastrointestinal disorders, and many other conditions, including osteoporosis. The U.S. Center for Disease Control and the Safe Water Foundation reported that 30,000 to 50,000 excess deaths occur in the United States each year in areas in which the water contains only one ppm fluoride.

… Fluoride suppresses the immune system: Fluoride inhibits the movement of white blood cells by 70%, thereby decreasing their ability to reach their target. Yiamouyiannis cites 15 references in his pamphlet, Lifesavers Guide to Fluoridation, that document immunosuppressive effects of as little as 10% of the amount of fluoride used in fluoridated water… Immunosuppressive effects run the gamut, from a cold that won’t go away to increased risk of cancer and other infectious diseases.”

Studies have shown that fluoride toxicity can lead to a wide variety of health problems, including:

Long-lost research linking fluoride to cancer has resurfaced in a Dutch film clip featuring Dr. Dean Burk, who in 1937 co-founded the US National Cancer Institute (NCI) and headed its cytochemistry department for over 30 years. In the taped interview, he equates water fluoridation to “public murder,” referring to a study that had been done on the 10 largest U.S. cities with fluoridation compared to the 10 largest without it.

The study clearly demonstrated that deaths from cancer abruptly rose in as little as a year or two after fluoridation began. This and other studies linking fluoride to cancer were government-ordered but were quickly buried once fluoride was found to be linked to dramatic increases in cancer.

Join the Fight to Get Fluoride Out of Drinking Water

There’s no doubt about it: Fluoride should not be ingested. At least when it comes to topical application, you have a choice. You can easily buy fluoride-free toothpaste and mouthwash. But you’re stuck with whatever your community puts in the water, and it’s very difficult to filter out of your water once it’s added. Many do not have the resources or the knowledge to do so.

I urge you to join the anti-fluoride movement in Canada and United States by contacting the representative for your area below.