We love our polls; polls on politicians, polls on the best restaurants, polls on the sexiest people in the world and now polls on God versus Aliens. I am usually skeptical of polls, especially ones I donâ€™t agree with (Ha, Ha). Now in a poll of 3,000 people from the general population, 58 % say they believe in Alien beings/the supernatural, while a separate poll said that 54% of people believed in the existence of God. Of the college students who said that they believed in Alien beings, 23% were freshman, 31% were seniors and 34% were graduate students. Does more education lead to more open-mindedness? Or are more open-minded people just the type that would want to further their education. In any case, I know many Ph.D.s who believe in UFOs, Bigfoot, ghosts, alien beings and this includes my daughter, who is currently in a Ph.D. program, and she is as sane as they come.

According to the New Testament, faith is â€œthe assurance of things hoped for, the conviction of things not seenâ€. So to have faith, to believe, to trust is to believe in something for which there is no evidence to support its existence, thus blind faith.

So why are people who are deeply into their religious faith standing on the opposite side of the room when it comes to the paranormal? And often times vice versa– I donâ€™t have the statistics handy, but I do find it interesting that a large number of those people in the science fields are often not religious people (Think about Creationism vs. Evolution). There is some evidence that strong belief in religious doctrine would make a person less open to the possibility of paranormal beliefs, since religions, like Christianity, have strong biblical sanctions against paranormal beliefs. Some would argue however that these beliefs are like two peas from the same pod; both are based on no or minimum evidence of their existence. (And come on, Jesus supposedly walked on water and turned water to wineâ€”thatâ€™s pretty paranormalâ€¦)

Do people just want to believe? Do they have to believe in something to be human and sane? And if we donâ€™t understand something, does our mind make up bizarre stuff to calm our senses and give order to our world, even though in the long run these justifications could be considered irrational thoughts.

To quote a famous all-knowing person with amazing abilities, â€œThey are only people and they (humans) will believe in anythingâ€ â€“ Monk (the TV show) 11/28/08. 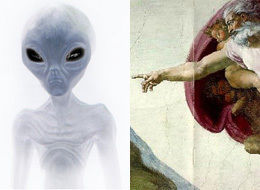