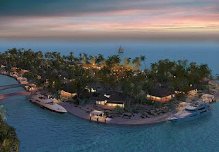 I had just returned to Houston from my travels in New Zealand/Norfolk Island when I first dreamed of that tropical island. I saw myself sitting outside a pink stucco building in the shade of coconut palms. I was intently watching some kind of lizards with curled up tails. I thought they might be scorpions, but they were not.

Each night for several nights, I dreamed of that tropical island. There was a man, a shaman, a teacher. He called out to me and said, come, come now. I did not know where or why or how this would happen, but I knew without a doubt that I had to go to that tropical island. I was being called, and I had to find out where it was.

A week or so later, I was doing psychic readings at Borders bookstore in Houston with a group of friends. A man sat down at my table to get a reading, and when I put my hands on top of his to align our energies, a rush of heat flooded my neck and face, and I was startled at the power of it. In the reading I told him I saw him with a red haired woman, and they were happy, getting married. He told me he had always known he would marry a red haired woman named Patty, and that he was still looking for her. I sensed she was coming into his life very soon.

When I finished his reading, he asked, “Do you always get so red in the face when you do a reading?” I was embarrassed, but decided to be honest. “No, I don’t. The energy when we touched was unusually powerful.” “I see,” he said with a sly smile, and I knew he had intentionally run that energy to test my sensitivity. Then he said, “I have a message for you.” I looked into his eyes, and he said, “I see you on a tropical island. It’s important for you to go there.” I laughed. “Yes, well, where is it? What island is it? I have seen it too, but I have no information on where it is.” “Oh, it’ll show up in due time. It always does, doesn’t it?” he smiled, and I knew no answer was necessary.

This was just one more confirmation in a barage of my psychic friends seeing me on that island as well. I was impatient to find out where it was. I felt an urgency to go there. One week later, I introduced Woody to Patty, his red haired woman, and they were married a few months later, but that’s another story.

My friend Sue was getting ready to leave for England, and she invited me to go with her. I thought, well it is an island, albeit not a tropical island. I told her I’d consider it, and began making plans to go with her.

As soon as I started thinking I would go, I started having a new dream. In the dream, I was on my way to a speaking engagement, and Sue asked me to take her to a bookstore. I told her I didn’t have much time, that I needed to get to my engagement. She was perusing the bookstore, and I was looking at my watch, knowing that I was late and that people were waiting for me. I woke up knowing that if I went to England that I would be where Sue needed to be, but not were I needed to be. I told her I couldn’t go. And, as a friend who also follows her guidance, she understood that I had to follow my own knowing.

It so happened that my family was having a family reunion the next week in Illinois, so I decided to go. It was the first time I had returned to my home town in nearly 20 years, since my mother’s funeral. I didn’t have much interest in the grayness of Granite City’s steel mills and railroad tracks, and my childhood memories are not that good. But, I felt it was important for me to go to this event. My brother Curt, only two years older than I, would be there, and I had some issues to resolve with him. My primal issue therapy that I had done in New Zealand had revealed some deep seated issues with him, and I wanted to talk it out.

I discovered that he had changed quite a lot, that his spirit was awakening, and he was having experiences not unlike the ones that I had when I first woke up. It was a good visit, and I felt something had been shifted in our relationship, and in my relationship to my family. In one of our conversations, I told him about the island dream, and he seemed very interested, like he had some kind of connection to it.

A few days after we were both back at home, me in Houston and him in Florida, he called. He sounded very excited as he said, “I was just watching a special on Bimini and the Road to Atlantis, and I think that’s the island you were seeing. I think you need to go there.” A shiver went down my spine and through my whole body. He had said the code words my guides often inspire someone to say when they’re bringing me a message, “I think you need to go there.” In that instant, I knew he was right. It was like all the tumblers on the locks lined up and the door to the safe popped open.

“I think you’re right,” I said in amazement. I was thrilled to have my brother bring me this piece of guidance. “Where is Bimini?” He told me it was just off the coast of Florida, 50 miles east of Miami, at one corner of the Bermuda Triangle. He said, perhaps I could come to visit him, and then he would drive me to where I could catch a plane or boat or however you get to the island. And, that’s how the location of my tropical island dream was revealed to me a step at a time.

Posted by Sandy Penny – WritingMuse – Love and Happiness Coach, Build Your Own Website Instructor at 4:46 PM