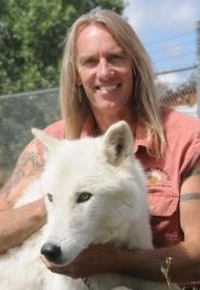 Leyton came back to continue to share his life’s journey through a world filled with paranormal events including contact with other world creatures.

Leyton is presently the director of a wolf sanctuary in New Mexico. He grew up as a farm boy with an amazing love for all types of animals. His life in the 80’s was the spirit journey with five Native American medicine men, learning about the spirit of nature and the nature of spirit.

Today he cares for captive bred wolves and wolf dogs and some very rare dog breeds, the New Guinea Singing Dogs. He is a gifted animal communicator and has a pack of nine dogs that help other dogs find mental, social, and physical rehabilitation. He also assists people with spiritual issues and he is a guest for many spirit retreats and seminars.

There were other things on his mind though this time as he told us about some of his very uncomfortable experiences with ET type entities. From the age of 4 he had these strange experiences. His memories included a babysitter female (he thinks) who looked like an Octopus in a dress and wanted him to eat a bologna sandwich. Later he had been shown a nursery of Asian-looking babies in drawers. Also as a little kid he was shown some horrific stuff, unspoken events, some in the form of sexual acts and death- (I will leave the details out for this blog). He spoke of brain implants he felt he had in the 60’s and 70’s and still may have. At times he felt he had someone else in his body and his body would occasionally transfer into what he called a dangerous creature, (this was perceived in the dream-state).

Even though he felt nothing good came to him from these strange experiences, I would say they enhanced his ability to perceive the world around him in a totally more real way and communicate with nature in a way few humans have done.

Sleep tight – there is something to be said about the Light and the Dark in our world.