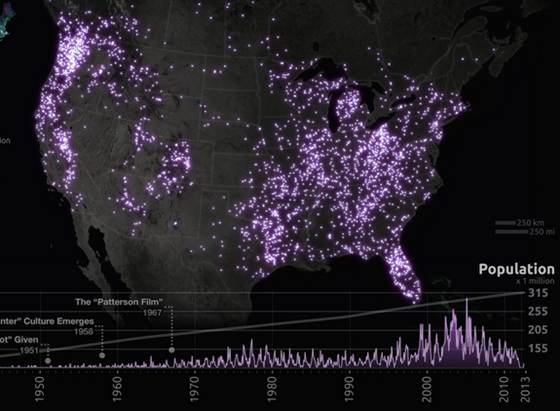 Reported sightings of Bigfoot — the legendary apelike creature that’s been a favorite of cryptozoologists for decades — have abounded for decades. Now, for the first time, someone has created a map showing the places where alleged Bigfoot sightings have occurred.

Joshua Stevens, a doctoral candidate at Pennsylvania State University, used data compiled by the Bigfoot Field Researchers Organization (BFRO), which tries to document “the presence of an animal, probably a primate, that exists today in very low population densities,” according to the group’s website.

Stevens converted the BFRO data and, using geographic-information software, plotted 3,313 data points showing where people have claimed to see Bigfoot (aka Sasquatch, Skunk Ape, Yeti, Skookum or dozens of other names). [Rumor or Reality: Tales of 10 Creatures of Cryptozoology]

“Right away, you can see that sightings are not evenly distributed,” Stevens said on his website. “There are distinct regions where sightings are incredibly common, despite a very sparse population. On the other hand, in some of the most densely populated areas, Sasquatch sightings are exceedingly rare. The terrain and habitat likely play a major role in the distribution of reports.”

The map, which uses reports from 1921 to 2012, shows a plethora of supposed sightings in the Pacific Northwest, the Ohio River Valley, central Florida, the Sierra Nevada mountain range and the Mississippi River Valley.

Stevens’ analysis also includes a chronological timeline showing a rise in reported sightings in the late 1970s (perhaps coinciding with the release of several B-movies about the mythical creature). Another spike in reported Bigfoot sightings occurred between 2000 and 2009.

Despite his exhaustive analysis of the BFRO data, Stevens stops short of giving the information more credibility than it deserves. “Ultimately, I’m not convinced there’s a descendant of (giant ape) Gigantopithecus playing hide-and-seek in the Pacific Northwest,” Stevens said. “But if respectable folks like … primatologist Jane Goodall believe there’s something more to the myth, I think it’s at least worth putting on the map.”

Goodall, in an interview that was broadcast on NPR in 2006, said, “I’m sure that they exist.” The famed primate researcher also confessed, “Well, I’m a romantic, so I always wanted that.”

A handful of other academics, including Jeffrey Meldrum, professor of anatomy and anthropology at Idaho State University in Pocatello, have taken a scientific interest in the legend of Bigfoot, but to date, no hard evidence of any hominid or apelike creature has been substantiated.

All alleged samples of Bigfoot hair, for example, have turned out to be from elk, bears or cows. Photos, audio and film footage have been determined to be inconclusive or hoaxes, and no bodily remains have ever been found — despite the fact that there would have to be hundreds or thousands of the creatures in existence in order to maintain the “species.”

But Bigfoot enthusiasts will no doubt continue their search undaunted — and now, thanks to Stevens’ map, they know where to look.