I worked for large apparel company in Georgia about 25 years ago. The CFO, Mr. Vincent, was an Italian gentlemen; he was truly a good guy, a straight shooter, and very honest. We became work buddies. After about 8 years or so working there, one day we were talking about what we were going to do on an upcoming weekend. He said he was having a barbecue, and had to do honey-do-list stuff. So I jumped in and said I was going to the Atlanta UFO Forum. He looked at me and said — “Really?”, so I told him my story, that I had been a researcher in the field for over 15 years, collecting hundreds of interviews from abductees, contactees, and UFO witnesses. He was interested in the abductee stuff, and I came to find he had his own story.

Vincent said when he was about 6 or 7 years old, a semi-transparent small figure came to the base of his bed. Then there was a sudden intense pain between his eyes. He had many sinus infections throughout his life and many spontaneous nosebleeds. When he was in high school he did several amazing papers about civilizations in Outer Space and even he didn’t know where all the details came from. He was pegged as the student with the magical-far-out imagination. Later in his life he had many vivid dreams and after a very restless night there were a series of black helicopters circling his home for what seemed like hours.

And finally–he has an extra vertebra in his neck. The doctors wanted to remove the extra strange piece of cartilage, but Vincent had a vivid dream in which a semi transparent being (the same one that appeared many years before) told Vincent if the vertebra was removed, he would die. Vincent heeded the warning, and he still carries this strange and sometimes painful extra hard tissue / implant.

He had never spoken of these experiences to anyone. It made him very stressed.

I always tell abductees – embrace your time with the unknown, but always be fearless, you have control, never give it up. 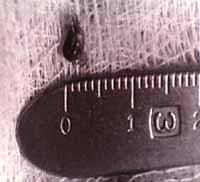