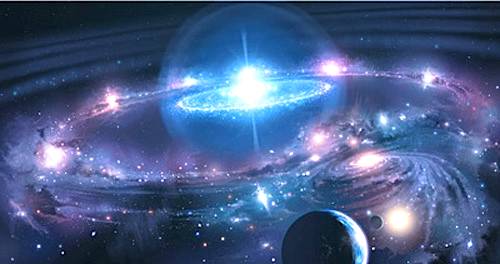 Every science fiction fan is familiar with the concept of an interdimensional “portal,” or an opening in the fabric of space and time that allows space voyagers to travel faster than the speed of light, through “hyperspace,” as a quick shortcut to anywhere, or any-when, in the universe.

The fictional concept is based upon the theory of “wormholes” in quantum physics, which are short “tunnels” that superluminally connect distant points of the space-time continuum with one another through a higher dimension.

Related to the notion of wormholes in quantum physics are “magnetic portals” in astrophysics, as both types of phenomena allow for distant points in space to be closely connected in ways that seem to defy conventional logic.

NASA recently reported that University of Iowa plasma physicist Jack Scudder discovered that there are regions in the Earth’s magnetic field that directly connect it to the magnetic field of the sun, circumventing 93 million miles of space.

These mysterious regions, known as “magnetic portals” are thought to be opening and closing dozens of times every day.

The appearing and disappearing portals are generally located many thousands of miles above the earth, in the upper atmosphere, and a large number of particles flow back and forth through these openings.

The particles flow through these portals as if there was no space between our earth’s magnetic field and the sun’s, and this interchange can have dramatic effects.

According to the NASA press release about this discovery, “Tons of energetic particles can flow through the openings, heating Earth’s upper atmosphere, sparking geomagnetic storms, and igniting bright polar auroras.”

These magnetic portals come in variety of sizes and durations–some are small and disappear quickly, while others are large, expanding and longer lasting.

NASA, who funded this research, will be studying these enigmatic portals in more detail.

The national space agency is planning a mission that will launch in 2014 called the Magnetospheric Multiscale Mission (MMS), which will examine this strange phenomenon with 4 spacecrafts, equipped with powerful magnetic sensors and energetic particle detectors to gather new data.

Finding the magnetic portals in the upper atmosphere, when they pop into existence for a short time, may prove to be a bit of a challenge, as they’re not only unstable, they’re also invisible.

However, Scudder has developed a method to locate the curious portals by mapping out how the magnetic fields of the earth and the sun intersect with one another.

The NASA spacecrafts will surround and observe the magnetic portals, and, hopefully, teach us how they work. Perhaps we can also gather some clues for the future application of this research.

When I interviewed quantum physicist Nick Herbert he told me about how these portals might one day be used for genuine superluminal space and time travel.

He explained that, “…wormholes are continually coming out of the quantum vacuum, popping back in again, and they’re unstable. Even if you could go into one of these, it would close up before you could transverse it…So…how to stabilize quantum worm holes?”

“The way you do that is you have to have some energy that’s less than nothing…negative energy, which is less than the vacuum…there’s something called the “Casimir force” in quantum physics, which is an example of negative energy. So you thread these wormholes with this negative energy, and it props them open…then you can use these things as time tunnels.”

So if we can figure out a way to prop open these temporary magnetic portals, and make them stable and transversible, maybe NASA’s research really will lead to something like “warp speed” on Star Trek or the “hyperdrive” in Star Wars.

Then, perhaps, all of those star systems that are light years away from us, aren’t really as far away as they seem.

Something more to think about when we look up at the Heavens.

Do you believe theres a way to “prop open” these temporary magnetic portals? Leave us your comment below.

David Jay Brown is an award-winning science writer, whose work has appeared in Scientific American, Scientific American Mind, and Discover magazines. He is the author of 12 books about the evolution of consciousness, optimal health, and the future.