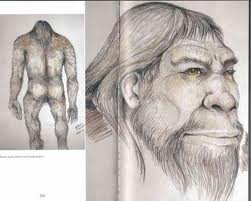 David Paulides wrote a book in 2008 called the Hoopa Project: Bigfoot encounters in California. David, a former law enforcement professional, is a highly trained interviewer. His interviews among the Hoopa First Nation may have been a historic first because of David’s investigative abilities. David also had on his team an excellent forensic artist named Harvey Pratt. The artwork that Harvey produced was quite amazing and I would guess a very accurate projection of what the witnesses were telling him.

One of the main findings was that the Bigfoot witnesses didn’t see the sagittal crest (pointed head), heavy brows, and ape-man “muzzle” features. The witnesses seemed to see what would be considered a more “wild-man” type of being.
My friend researcher Kewaunee Lapseritis has said for many years that at a minimum there are two types of Bigfoot and maybe more, again the ape-type and the other human type. Also there may be another one called an Ancient One. This Ancient One has some features of both other types. On my last mini-expedition with Kewaunee I was lucky to get a distance photo of an Ancient One (see below).

Reports of this “wild-man” type go back to the 1800’s and were favorite conversation of lumberjacks and other people who worked out in rural forested areas of North America. If you look at the Patterson/Gimlin film and the photos that have come from it, it truly shows human features, but some ape features also. There have also been interesting reports from Tennessee and Alaska stating these human features. Could this human-type Bigfoot be our missing link or are we their missing link? It looks like we have common DNA between the two species.

Sleep tight – We will find out someday that Sasquatch is our closest relative in the human life chain.