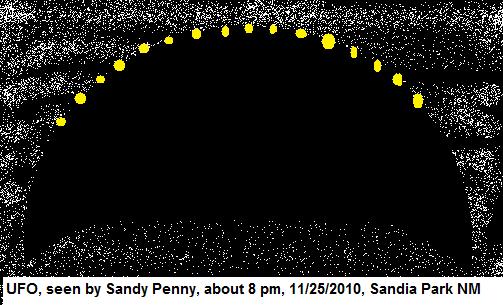 Hello all,
From Sandy P it was very nice of her to share this sighting with us , a comment from me — there is an area between NW of ABQ. toward Farmington where I have heard of daylight sighting of organic UFOs- in the form of Manta -Rays – ( Huge )

Sandy and I would appreciate any comments on her sighting

Hey there, I wanted to share with you about a UFO I saw on Thanksgiving night. I walked out to my car around 8 pm Thursday night. It was a very bright starry night, and as I looked up at the stars, I could see a moving black area blocking our the stars. It was very large and very low, and moving very slowly, like a shadow almost. As I focused in on it, I could see that it was curved on the front and had a row of small dim lights around the curved front, more curve and less angular than a boomerang, which is what it at first reminded me of. As I continued to focus on it, I could make out the shape of the back of it as also being curved, but inward. It kind of reminded me of a manta ray as it moves through water, just dark shadowy. I watched it for several minutes until it was out of viewing range. The only reason I saw it at all was because it was such a clear starry night that the area of stars being blacked out by the object as it moved highlighted it.

I attached a crude illustration I made. Any other reports on anything like this?