A newly-published book by a retired NORAD officer predicts October 13, 2010 as the tentative date for a fleet of extraterrestrial vehicles to hover for hours over the earth’s principal cities. Author says the event to be the first in a series intended to avert a planetary catastrophe resulting from increasing levels of carbon-dioxide in the earth’s atmosphere dangerously approaching a “critical mass.”

Winnipeg, MB (PRWEB) September 13, 2010 — A newly-published 352-page book by a retired Air Force officer, Stanley A. Fulham, tentatively predicts October 13, 2010 as the date for a massive UFO display over the world’s principal cities. According to the author, the aliens will neither land nor communicate on that date; they are aware from eons of experience with other planets in similar conditions their sudden intervention would cause fear and panic.

The book, Challenges of Change (3rd ed.), reports this event will be the initial interaction in a process leading to mankind’s acceptance of the alien reality and technologies for the removal of poisonous gases from the earth’s atmosphere in 2015, if not sooner.

The author draws upon his military experience with the UFO phenomenon dating back to WW2, and later, with NORAD and his subsequent life-long association with a senior NORAD intelligence officer who provided him a wealth of historical data relating to NORAD’s experience with the UFO/alien reality which has never been revealed to the public. In the military’s view, as conveyed to and understood by Fulham, the public is not yet ready to accept an alien reality.

Fulham writes it is generally recognized UFOs function beyond our earth’s physical laws, and has concluded answers to questions regarding who they are, where are they from, why are they here, are they a threat, and the mystery of abductions could only be found at a higher dimension of reality.

For more than a decade, through the services of a world renowned channeler, the author has communicated with an ethereal group of entities known as the Transcendors — 43,000 very old souls who combine their vast experience and knowledge through eons of incarnations, providing advice and information to humans in search of basic realities of mankind’s existence.

The book Challenges of Change reports on the author’s years of communication with the Transcendors in a question and answer format intended to inform and challenge. The Transcendors reveal through the author crucial information about urgent global challenges facing mankind such as earth changes, international terrorism, worldwide financial collapse and the environmental crisis. One revelation is al Qaeda has a dirty nuclear bomb and WMD, but faces a moral quandary over “containment of collateral damages.”

Utilizing the theme of the Four Horsemen as symbolic metaphor, Fulham warns mankind will survive all of these future challenges, except the CO2 pollution of our atmosphere. According to information provided to the author by the Transcendors, the build-up of CO2 pollution is rising 1% annually to a “critical mass” of 22% in which mankind could not survive ”without outside intervention.”

According to Fulham, the Transcendors state they have borne witness to countless thousands of alien civilizations who polluted their planets to total extinction where not a single being, animal or plant survived. They urgently warn planet earth is presently on the same self-destructive path. Fulham reports the aliens are well aware of our environmental crisis, and have benevolently decided to rescue mankind in this vast universal drama.

Fulham has been in contact with a distinguished foreign ambassador who read the book with great interest and dispatched it to his home government, where it was translated and studied by hundreds of their top government officials.

A website containing videos of the author discussing his research conclusions and other vital information has been created at: http://sites.google.com/site/challengesofchange

Fulham clarifies there are no absolutes; the principal of free will and choice that exits with all souls precludes all absolute realities, and the aliens may decide to postpone their intervention — but the Transcendors confirm it will nonetheless occur in 2010. Quoting the author, the event will “occur this year, in what will surely be one of the great dramas of our galaxy, the introduction of their alien civilizations and technologies to mankind. We are not alone, and our world will have changed forever.” 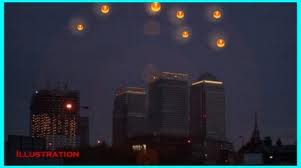 2 Replies to “Retired NORAD Officer's New Book Predicts a Tentative Worldwide UFO Display on October 13, 2010 ???? Or just one of many past October Surprises?? Not in this Reality..”