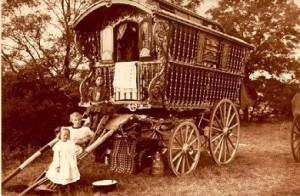 Roma or Gypsies live primarily in Europe with their distant roots in India. Romani Law controls their lives, at least with the traditional families. Roma Law comes from the Hindu purity laws.

My grandmother I believe was part Gypsy, and she had powers that would scare the hell out of us grandchildren. She could read our minds, and that was quite tough for mischievous little boys. Her Gypsy blood was kept hidden from the family until long after her death. One day I was being extra bad and my grandmother said god would punish me if I didn’t listen to her; well that was all I needed. I jumped on the floor and spread my hands and legs and said “God strike me dead.” Well that got her attention and she never said that again. (Fear will make you small, fearlessness will make you Big.)

Romanies possess many amazing powers and abilities including empathy, precognition, retrocognition, and psychometry. They have reached out into other realms through astral travel projection, curses and blessings. If you were having trouble with other dimensional entities, it would be great to have a Gypsy as a close friend to help solve the issue.

One the most interesting parts of the Roma culture is their understanding of vampires. Their strong belief in vampires has tied the legend to their culture especially in the countries of Hungary, Romania and the Slavic lands. Their vampire beliefs come from Hindu ancient beliefs in the deity called Kali, who loved drinking blood, had fangs and wore the garments of corpses. The Gypsies have a high fear of vampires and their ability to wreck great havoc for the living. So Gypsies do everything possible to keep out of the way of the vampires. The Gypsies have an elaborate burial process, putting steel or iron needles into the dead person’s heart, fingers, eyes and ears to keep the vampires from making their dead relatives into “Living Dead.” Gypsies have an amazing concept of evil and good and what is living and working in the shadows.

Sleep Tight, you probably have a Gypsy in your family tree – if you do, embrace it, they are one of the most interesting cultures in the world.