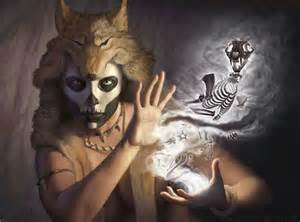 My research partner and I had a very informative interview with Vivian and Lucy from Gallup, New Mexico. Gallup is known for its Wild West spirit and for being a place of interesting and at times deadly happenings.

Vivian had worked in the past for the local police department. One day one of the officers came into the station and confided in her about a strange event that had just happened. He was traveling down one of the main highways that pass through the city of Gallup. He was driving about 55 to 60 miles per hour and everything seemed quite normal. Then in his rearview mirror he saw a large shadow moving up quickly behind the police car. It pulled up next to the 60 MPH car with no effort. Once it was next to the car he could see it looked like a tall human- like being, seemingly naked, running/gliding next to his vehicle. The officer described the being to have long hair, strange large eyes and abig witchy-looking nose. The officer was freaking out, so he sped up to 80 MPH, but the being kept up. Then as suddenly as it appeared, it disappeared, to the officer’s relief.

My daughter had a similar experience in Arizona back in the late 90’s. She and her boyfriend at the time were driving about 35 to 40 MPH in an area outside of Tucson, when alongside their truck pulls up this being with female features, a witchy-looking nose, strange black eyes, pale skin and gray/black flowing hair. At first this Skin walker was looking straight forward, but suddenly it turned to look at them with a powerful scary glare, never to be forgotten by either occupant of the truck, and then it suddenly was gone.

I have come across many other similar stories in my years of study in the world of the paranormal.
So was this a Shape Shifter or Skinwalker,and is there a difference? – a question to be answered in another posting.

Sleep tight, even though a Skinwalker encounter can be quite frightening, I know of no physical harm they have done to man or beast.