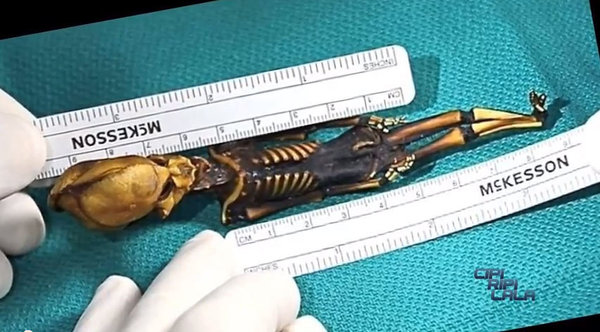 A 6-inch-long (15-centimeter-long) skeleton was found in Chile’s Atacama Desert. The skeleton showed several anomalies, including its alienlike skull, teensy body and the fact that it had just 10 ribs rather than the 12 that healthy humans normally have.
By Jeanna Bryner, LiveScience

A teensy skeleton with a squashed alienlike head may have earthly origins — but the remains, found in Chile’s Atacama Desert a decade ago, do make for quite a medical mystery.

Apparently when the mummified specimen was discovered, some speculated that it was an alien that had somehow landed on Earth, though the researchers involved never suggested this otherworldly origin.

Advertise | AdChoicesNow, DNA and other tests suggest that the individual was a human and may have been 6 to 8 years of age when he or she died. Even so, the remains were just 6 inches (15 centimeters) long. [See Images of the Alien-Looking Human Remains]

“While the jury is out regarding the mutations that cause the deformity, and there is a real discrepancy in how we account for the apparent age of the bones … every nucleotide I’ve been able to look at is human,” researcher Garry Nolan, professor of microbiology and immunology at the Stanford University School of Medicine, told LiveScience. “I’ve only scratched the surface in the analysis. But there is nothing that jumps out so far as to scream ‘nonhuman.'”

Analyzing the tiny human
Nolan and his colleagues analyzed the specimen in the fall of 2012 with high-resolution photography, X-rays and computed tomography scans, as well as DNA sequencing. The researchers wanted to find out whether some rare disorder could explain the anomalous skeleton — for instance, it had just 10 ribs as opposed to 12 in a healthy human. They hoped to determine the age at which the organism died, as its size suggested a preterm fetus, a stillborn or a deformed child. They also thought the DNA would confirm whether it was human or perhaps a South American nonhuman primate.

The remains showed skull deformities and mild underdevelopment of the mid-face and jaw, the researchers found. The skull also showed signs of turricephaly, or high-head syndrome, a birth defect in which the top of the skull is cone-shaped.

The genome sequencing suggested that the creature was human, though 9 percent of the genes didn’t match up with the reference human genome; the mismatches may be due to various factors, including degradation, artifacts from lab preparation of the specimen or insufficient data.

The team also looked at mitochondrial DNA, or the DNA inside the cells’ energy-making structures that gets passed down from mothers to offspring. The allele frequency of the mitochondrial DNA suggested that the individual came from the Atacama, specifically from the B2 haplotype group. A haplotype is a long segment of ancestral DNA that stays the same over several generations and can pinpoint individuals who share a common ancestor way back in time. In this case, the B2 haplotype is found on the west coast of South America.

The data from the mitochondrial DNA alleles point toward “the mother being an indigenous woman from the Chilean area of South America,” Nolan wrote in an email.

More mystery
The jury is still out on the mutations that caused the deformities, and the researchers aren’t certain how old the bones are, though they estimate that the individual died at least a few decades ago. They didn’t find any of the mutations commonly associated with primordial dwarfism or other forms of dwarfism. If there is a genetic basis for the deformities, it is “not apparent at this level of resolution and at this stage of the analysis,” Nolan wrote in a summary of his work.

This wouldn’t be the first time alien-looking remains have been brought to the attention of science. The alienlike skulls of children were discovered in a 1,000-year-old cemetery in Mexico. Researchers who examined the skulls said they had been deliberately warped, in accordance with a practice of skull deformation that was common at the time in Central America.

Advertise | AdChoices”It’s an interesting medical mystery of an unfortunate human with a series of birth defects that currently the genetics of which are not obvious,” Nolan wrote of the Atacama skeleton.

The research was featured in film “Sirius,” a crowd-funded documentary that premiered on April 22 in Hollywood, Calif.