What are these super rich, fertile and long lasting mystery soils of South America? Here is a little background; their name is “Terra Preta do Indioâ€ (Amazonian Dark Earths or Indian Black Earth). Named for their very dark color, they were discovered by the white guys during the late 1800’s. The theory is that they may have been created by pre- Columbian Indians 500 to 2500 years ago (a very wide range for any theory).
Another theory was that (TP) was naturally formed from some event related to the Andes volcanoes or a formation created by pond or lake sedimentation. All of these theories are conflicting and leave open the possibilities for new discussions.

These soils have an amazingly high organic matter content, with high levels of black carbon-charcoal in the mix (which may be the key). Terra Preta have very short fallow times, 6 months or less, (the fallow time is needed only because of the weed infestation- super fertile soil grows great weeds). Normal soil takes 8 to 10 years to naturally rejuvenate, without negative additives. It has been reported that these soils (TP) can be under continuous cultivation for at least 40 years, unheard of in the normal agricultural world. Terra Preta would be considered organic farming with no soil additives; the need for pesticides would have to be considered for the final classification (organic or conventional).

Now can these Dark Earths be a factor to reducing global warming? Maybe. The earth’s soil contains a large percentage of the carbon reserves in the world, but most soils are unstable and slowly release their carbon into the atmosphere and add to the CO2 and to the problem. But it seems the (TP) soils are very stable and hold the carbon in the soil and don’t release it into the atmosphere (or at least releases it very, very slowly). Can we create more of this (TP) and cover our farmlands with it?

Was TP a wonderful soil management project of the Ancients or a gift from the GODS (friendly Alien beings)? If so, of course this may have cost the indigenous folks a few sacrifices (Blood for Food Program), not much different for our present Blood/Oil for Food program.

Lastly, can we duplicate the process to make this (TP) soil without paying direct tribute to our Alien friends? Blood is not a just tribute in a moral world.

Sleep Tight – your Government is watching over you.

PS- I encourage you to do further study of (TP) on the Web. 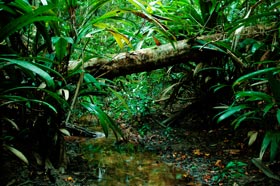 The Lush World of (TP)

2 Replies to “Terra Preta — Soil and Solutions from the Gods (?)”