During my many years in the incredible realm of â€œsomething from other worldsâ€, I have found that human dreams are a profound part of the reality of it all. In the last year or so, I have been told about UFO/alien invasions in a very lucid way. These invasions come from two directions, one interior and one exterior. I will discuss in this post the interior manifestation of the alien conquest.

First there is the Walk-in phenomenon, where people are taken over by an individual being from either a parallel universe or from our same realm. I see two different outcomes here. First, the foreign being blends in and loses its old identity and only brings forward its strongest traits in the host human. This can be a positive for the host human or a negative. I will give you examples of the positive. When I lived in Georgia, I spoke with a group of people I called late bloomer prodigies who woke up one day with amazing ideas or general powerful mental abilities. A 55-year-old postman with no past interest in alternate energy put together a free-energy type device in one day, much to his familyâ€™s and his own amazement. Also a 39-year-old schoolteacher suddenly began playing the piano, as if she had been doing it all her life, but according to her family, had never played one note before she went to sleep that one strange night. Both of these examples have one thing in common; they both dreamt they had merged with beings of unknown origin, and felt quite different when they woke up.

Now the negative side–people go to sleep very normal and very stable but wake up strange, indifferent, and violent, a whole personality overhaul and not in a positive way. They scare their families, may begin abusing them, then divorce results and sometimes they even commit other crimes and then get sent to prison. All this came from one strange encounter on one strange night.

Then I have also heard about people in a deep mediated trance, stepping too close to the edge of this interior mind universe and this attracts other beings to enter their mind/ body and guess what â€“ it happens. It you welcome something in, it will come in, but you may not always like the result.

I have been told from psychics (whom I trust) that there are many beings, some good and others bad, waiting ready and able to invade us from our own interior universe â€“ our dreamland.

But fear not because always remember one thing, they canâ€™t enter or change you without your invite. They may intimidate or threaten you, but you have the interior power to resist this alien invasion.

Sleep tight and be cautious as you drift off to dream in your other reality. 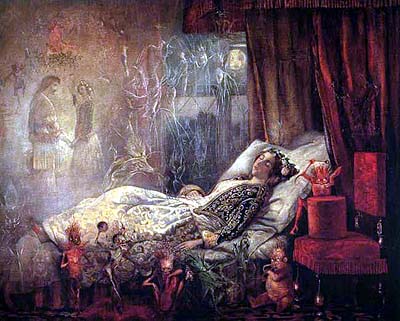