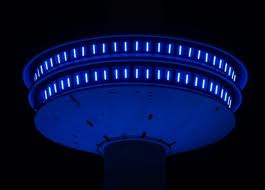 It has been heard over the years of the visit of some creatures that look like humans from outer space to the earth. Also, many have sworn to have caught glimpses of these creatures. Now beat this… they have visited some parts of Nigeria. Gabriel ewepu writes on this myth or reality.

Ibrahim Shuaibu, a 14-year-old boy living in one of the villages in Northern Nigeria. One late evening, decided to go and check his fishing trap which he set earlier in the day. On reaching the small river, he suddenly noticed that the setting sun was getting closer to his location as he waded in the water feeling for his trap. But within seconds it dawned on him that what he initially perceived to be the sun was rapidly coming almost parallel to him, and this greatly unsettled his young mind. The object was glowing and circular, and smoothly glided like a huge incandescent saucer.

Shuaibu expectedly panicked and began to run out of the shallow river, and the hovering object slowly glided after him in pursuit. It was after he ran out of the banks of the river and to the edge of the small mountain that he breathlessly turned to look back at the strange object; he then saw that the huge saucer had stopped at the edge of the river, and was very calm and steady as if some people were inside the object watching him intently.

This story told by one Ibrahim, is a characteristic encounter with an Unidentified Flying Object [UFO] or flying saucer, popular in the Western world. In fact, polls have shown that one out of every four American believes that UFOs exist and are visiting the earth on a regular basis; and an estimated four million Americans claim to have seen a UFO, with some having encountered the alien beings in the object. The question is sometimes asked as to why UFOs are not seen in Africa. But many informed researchers are quick to give the simple answer; they are seen, all the time and as much as anywhere else.

Professor Oko Offoboche, an Abuja-based metaphycist, IT specialist and researcher, said that the reason why the UFO phenomenon is not visible in this part of the world is because much of Africa’s populations still live traditional lives in isolated rural areas, and aliens and UFOs seem to prefer clandestine visitations, and aerial manifestations at local interior locations. According to him, “Most Africans do not have access to the internet, communications networks or media outlets that westerners take for granted. Most do not own mobile phones with or without cameras. As a result, virtually all UFO sightings remain unreported but by no means forgotten by those that experience them.”

Also according to checks on the popular blog sites for the paranormal, www.starseeds.net, ufologists and sky watchers have affirmed that some sighting reports do make it to the west and Nigeria is one nation that is known to experience high levels of UFO activity. And in the year 2009, an entry was made of a report to the world’s most popular UFO scientific organization for Mutual UFO Network (MUFON), whose job is to log in all UFO sightings around the world. The report was from Lagos, Nigeria, sent in by Adejide Olu, a man who witnessed an UFO in the Nigerian sky. According to him, it happened on May 1, 2008, the previous year.

“My wife and I were both coming [walking] from my brother’s place who just relocated to the vicinity close to my place which is Mile 2 area of Lagos. As we were walking, I looked at the sky [which I usually do just as a hobby] then, I saw two objects in the sky moving around. They were oval-disc like in shape and silvery [illuminous] in appearance. I noticed they were darting around but one was more active than the other. Quite surprised at their movement, I realized what we saw were obviously aircraft. To my knowledge, these crafts were unlike any man-made machine as they did not make any sound at least to our hearing.

“It was dark when we eventually got home but to my surprise, my neighbours had also seen it, they didn’t really know what they were. But due to my knowledge on it [I have read and seen documentary] I knew they were UFO. At a point, one was relatively stable but the second kept moving, darting around as if on observation mission. There was no public power supply, so the sky was quite clear. I was awed by the reality facing me, all what I have read and seen on documentary seems to be facing me that night. I watched till two minutes after 9 pm before going to bed. I later showed my brother the illustration of UFO in the Longman dictionary, and he agreed that what they saw as similar to the UFO illustration.”

On July 2, 2012, a somewhat obscure celebration will take place worldwide – that of World UFO Day, a day that came into existence in the year 2001 in the United States of America, but which has never been celebrated on our shores until this year as advertised by a Nigerian UFO group, www.nigeria-ufo.com. Simply put, the international promoters of the event have said that the World UFO day is a day dedicated to the existence of unearthly/unidentified flying objects, therefore, the day is dedicated to raising awareness about the undoubted existence of UFOs and with the intelligent beings from outer space. They also declare that the day is used to encourage governments to unclassify their knowledge about sightings throughout the history, believing that many governments especially that of the United States of America, are believed to have gained exclusive information about UFOs through their military departments.

Of particular interest is the fact that Nigeria, being a very religious nation has not realised the religious importance of the UFO phenomenon. In July 2009, in the state of New Mexico, USA, Christian preachers and scholars comprising of notable personalities like William Alnor, L.A. Marzulli, Pastor Chris Ward and others, came together in the first Christian Symposium on UFO/Aliens, where they made an official statement on the phenomenon.

In their communiqué, they averred that God did not create any other extraterrestrial life outside of the planet earth, and therefore any being or flying object purported to visit the earth is a manipulation of the satan and the fallen angels; and this is part of the end time grand plan to deceive human beings into accepting satanic agents and false miracles.

But ironically, there are a lot of religions springing up today with beliefs and certain affiliations to UFO and the alien beings that come from them. And many of them are now having their branches in Nigeria here. On March26, 1997, in the United States of America, the California Police Department discovered the bodies of 39 members of the Heaven’s Gate religious cult who had committed suicide in order to reach an alien space craft which they believed their souls would board at their death, and the UFO would take their souls to another “level of existence above humans”. The cult group, led by Marshall Applewhite and Bonnie Nettles, believed in several paths for a person to leave the earth and survive before the “recycling”, one of which was hating this world strongly enough; according to Applewhite, in a taped message he did before the mass suicide of which he led, “It was the only way to evacuate this earth… It is also possible that part of our test of faith is our hating this world, even our flesh body, to the extent to be willing to leave it without any proof of the Next Level’s existence.”