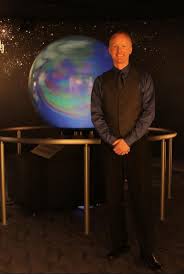 The March meeting of the NM UFO/Paranormal Forum here in Albuquerque was proud to present David Marler to discuss his research on triangular UFOs. David did an excellent job defining the history of this special type of UFO. The known history of this type of UFO goes back to the mid-40s but probably earlier. Over recent years the sightings have grown in percentage of total UFO sightings. They are now the second most popular sighting being reported.
As David states the triangular group has a history of details by multiple witnesses, probably because they at times move extremely slowly, like they are taking some type of observations or measurements. I personally like the idea that this is a tourist vehicle bringing visitors from other dimensions to watch the crazy humans in their world.
In his book “Triangular UFOs: An Estimate of the Situation,” David lists a bunch of characteristics that make the triangular UFOs quite unique in many ways such as: triangular in shape, lights flashing, three lights on the corners, huge size, can make flat turns, hover, move very slowly, rapid acceleration in any direction, silent flight, low altitude flight, EM effects, and sharp turns. Also in some of the craft there are rows of windows (for the tourists of course).
I personally have had a sighting of one of these ships. While camping in Wisconsin about 20 years ago a group of us were sky watching. It was a clear night and the stars were out in force, but suddenly a section of stars got covered with an absolute darkness. As more of the sky got covered I noticed an edge outline that seemed to be a triangular shape. So the best I can tell it was one of these triangular ships. Also I must note we all had funny feelings in our stomachs, which passed as the ship did.
David did an excellent job of laying out the history of these craft and letting us decide what to make of them.
Sleep tight, as the cosmic tourists pass over your house.
MWiz.