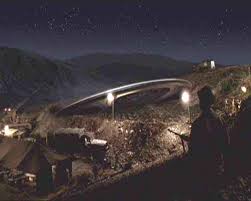 Over the past 80 years, there has been an international government team in charge of collecting the debris of UFOs and their contents, including but not limited to IDEs (inter-dimensional entities). I believe these IDEs make up over 90% of non-human beings that presently live among us. There have been over 50 crashes of alien ships over this 80-year period. A few of the countries where crashes have occurred include the US, Canada, Russia, England, Brazil, China and Peru, to name a few. About 10% of all countries have had a crash or two. I believe the US has had the most, mostly because we enjoy shooting them down.

But let’s focus on a downed UFO craft in the Peruvian jungle in 1997. This story came from a Lance Corporal in the Marines. He was in Peru in 1997 working in support of a Special Forces Group, working a drug detail (that is what he was told). But one day working at a parameter radar station he and his fellow soldiers heard a large boom and saw a huge object crash into a small mountain. What they saw was a craft partially buried into a ridge. The craft was dripping greenish liquid, making a humming noise and flashing colorful lights. The craft had a hatch type opening at the top of the craft and a presence could be felt. The beings inside the craft seemed to be calling to the Marines to help them. The craft was about 30 by 60ft. egg-shaped or tear-drop. He described the craft as organic art and it made no reflection, even though it looked very much metallic.

It was later found out that the Peruvian military, with help from the US, shot the UFO down. The beings in the craft projected their images in the minds of the Marines. The beings also seemed to touch them, which the Marine said it was the touch of angels. The UFOs and the beings inside were hauled away never again to be seen by the Lance Corporal.
The last comment Lance Corporal made was that rogue government agencies controlled the UFO retrieval programs of the world.

Sleep Tight – the biggest threat to us is ourselves… not any non-human race, at least for now.