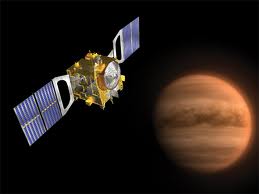 Hello, astro-nuts!
Venus Express, which was launched by ESA back in 2005, has been studying the atmosphere of Venus from different levels within it, as well as from its highly elliptical orbit. During a series of low passes in summer of 2008, October 2009 and just this past February and April, Venus Express found data suggesting that the atmosphere above the poles of Venus is much thinner than previously thought–60% thinner, in fact. Studying the density of the atmosphere is very important to the mission controllers, because they wish to take the craft lower into the atmosphere to continue observing. Given the destruction of so many other robotic explorers before this one, the team wants to be sure that they understand the density of the Venusian atmosphere so yet another spacecraft isn’t lost. To date, the closest Venus Express has been to the surface was about 108 miles. Next week, the craft will drop down to 102 miles. On average, its orbit takes it from 155 miles all the way out over 41,000 miles, yet it can complete an orbit in about 24 hours. However, at its farthest point, the sun’s gravity starts pulling the craft off course and its engines are fired to compensate. Unless its orbit can be lowered, Venus Express’ fuel will be used up by 2015. With constant study, this orbital lowering may be achieved by 2012.

Venus in Ultraviolet from Venus Express-ESA/MPS/DLR/IDA
Nice fall weather is finally returning to central PA, so I’m looking forward to getting my telescope out and hunting for Comet Hartley! Have any of you had the chance to look for it yet? Its not quite naked-eye visible yet, but I’ve seen reports that you can pick it up as a fuzzy blob with 10×50 binoculars, and most definitely a small telescope. Don’t forget that Hartley will be near the Double Cluster in Perseus tonight and Friday night. The Double Cluster in Perseus is just that, two star clusters that appear to be near one another–NGC 884 and NGC 869. The two are not actually that far apart in space, only about 800 light years (they are 7600 and 6800 light years from Earth, respectively). While Hartley may only look like a “fuzzy” from Earth without much of a tail, the WISE spacecraft with its incredible infrared detectors, has picked up a very long tail on Hartley that stretches over a million miles behind it.