Well it looks like the non-human beings, who may want to do harm to us, are vulnerable to our conventional weapons – as long as we get a square shot at them. That’s what I hear, anyways, but it is hard at times to shoot alien beings who may be able to move into another dimension or at least through a wall. And they (the non-human beings) have beam weapons/ flash guns, which are powerful and deadly at short range.

Our government has been developing weapons for the last 35 years or so to defend our territory from the underground hordes. Here are some of the weapons projects to solve the problem.

1. Joshua- low frequency pulse-generating weapon, which can level structures 2 miles away. Developed in California and tested in New Mexico.

2. Gabriel – a high-pulsed sound-generating device. It seems to be effective against alien craft and their weapons. (Maybe responsible for some alien-ship crashes in the past.)

3. Excalibur â€“ used to destroy underground bases. It is a missile system that is a penetrating weapon. A missile that can drill down 1,000 feet or more and with its nuclear warhead can do some major damage.

Remember the Bunker-Buster we used in Iraq -in the SHOCK and AWE Thriller. That was probably the live test for an Excalibur type weapon system. And lets not forget SDS (Star Wars Defense Systems). Where has it gone? It is still there, it has some issues and the Alien Beings are really pissed about it.

I am not 100% sure there are underground bases loaded with crazed, blood-thirsty, big- eyed alien beings, but the U.S. has been developing weapons that would match this strange and maybe real threat.

Keep your eyes and ears open for bigger and more powerful weapons. I believe there is more on the horizon, from the Russians, for they are possibly fighting the same battle as we are – see my posting â€œRussian Roswellâ€ from August 15th.

Sleep tight and soundly — our government has you covered. â€“Or NOT. 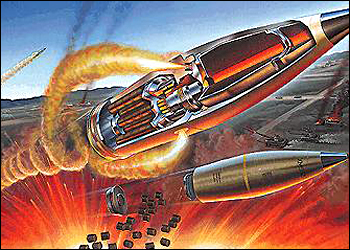