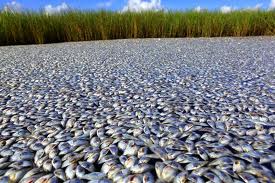 Why all these Massive Kills of Fish and Birds? Could this be the big Change coming?

So first we need to put this in prospective: massive kills happen on a quite normal basis, but the disturbing thing is that most of the reasons given have proven that we know very little about what is truly causing these deaths.

So that was the unusual thing about the cause given for 2 million fish dying in Chesapeake Bay last week. The official reason was that super cold water killed them; the water in the bay was 3 plus degrees below normal. This is a very amazing event; it takes some profound event to make that happen. So I did some research on the US Navy Ocean Current archive website and checked out their interactive Gulf Stream flow maps. I found that the sub-currents which are fed from the Gulf Stream had all but stopped flowing into the bay. The Gulf Stream sub-streams are very warm currents and they are responsible for the amazing fish and crab beds in Chesapeake Bay. So this is bad, very bad, but going out further at a more global level, it looks like the pump that runs the machine called the Gulf Stream, located in the center north of the Gulf of Mexico, has re-formed into a weak eddy feature – an eddy feature which is not presently able to push large quantities of warm water up the East Coast, let alone across the ocean to warm England and Northern Europe.

It looks and feels like unless something really changes from some unknown source, Europe is in big trouble. This type of climate change happens very quickly. Remember the buttercups flash frozen in the stomach of the Mammoths, also caused by a very sudden climate change?

So keep an eye on England and Europe the balance of this winter; if record cold and snow happen and next summer is very short, it’s a mini-Ice Age. The result to humanity: millions will perish as cold winds blow into Southern Europe and Northern Africa. It will take the Gulf Stream maybe 10 to 20 years before it starts flowing correctly. In normal times it would have taken 100 to 150 years, but that thing they call Global Warming will lessen the duration of the world impact.

So what was the cause of the pump weakening in the Gulf? It just may be the oil spill, because massive oil on the surface of the water and at different layers can redistribute heat and change currents’ directions and overall intensity. We will never be sure, but the result could be a super disaster 100 times worse than the spill itself.

Sleep tight, but brace yourself if you live in the Northeast US, for this year or next you may experience the summer with no summer. And Northern Europe and UK will feel like just another winter day in Central Siberia.