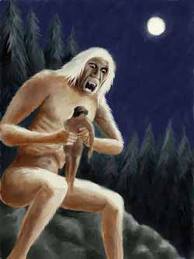 A snaggy-fanged giant roams northern Ontario, Canada among the Ojibwa and Cree tribes. The giant may very well be a human with Windigo Complex, the desire to stalk and kill humans and eat their flesh.
As the legend goes it’s happens more in the winter when some of the Indians run low on food which causes this strange madness of cannibalism. The windigo is a giant either male or female. He/she is described as skeleton-like, lip-less with a snaggy-fanged mouth. Their protruding eyes roll in a pool of blood. He /she howls, screams and whistles (somewhat like a Bigfoot). They will also eat each other if two meet in the woods. They have superhuman strength and as noted a super ugly appearance.

The Indians believe this is a possession by an evil spirit. The Indians see this happening in three possible ways. One is a windigo may possess a person on his own initiative, such as when a group of Indians are in danger of starvation and tempted to commit cannibalism to survive. This act of cannibalism is proof of windigo possession, and they could legally be put to death by the tribe.
The second way to become windigo is on a vision quest. The young man/woman goes out to be tested in life’s ways, with no food and water and he goes into a trance. And this person sometimes meets a windigo spirit who then possesses the vision quester.
The third way to windigoism is through dark magic. If a person offends a shaman, the shaman could summon a windigo spirit to possess the offender.

Psychologists, anthropologists, and psychiatrists have viewed this condition of windigo as a psychotic event, a possible result of the hard nomadic life in the deep forest of northern Canada and certain oddities directly from the Indian culture of the area. This Windigo legend has been occurring for hundreds years and the sighting of the giant are still happening as I write this posting.

Sleep Tight, put a line of sea salt at all entrances to your house if you live or are visiting in northern Ontario, a Windigo spirit cannot cross the line, only you can let him/her in.