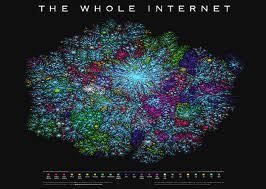 The first concept of the Net was in 1962 by a UCLA professor named Leonard Kleinrock who started with the idea of “time-sharing” by putting two primitive computers together (network) so they would talk to each other. Then Leonard expanded the two to 100 and there was no stopping it. The military was the first to network building-to-building, base-to-base, and universities started hooking to other universities. Then in the 80s it was country to country, and now every country in the world has some form of World Wide Web access.

After reading for several hours about how the internet works, I still had no clue, but neither do 99.9% of the people on earth; it’s sort of like knowing how electricity works – no one really knows. Here in the US and all other first world countries, over 80% of all business transactions rely directly on the internet and the other 20% indirectly, so without it we are screwed. I briefly wrote about this danger a few months ago, and I am boldly going to make the prediction that in 2011, the Internet will crash and take down the world stock markets for a week, serving as a warning about the vulnerability of this fragile technology.

It has started – a 16 year old has been arrested for hacking into Visa and MasterCard websites as retaliation for them closing the WikiLeaks accounts. There are now threats that a whole army of hackers will hack into the Swedish government to protest the arrest of Julian Assange – the Robin Hood of Transparency.

It is easier and more effective to use hacking as a tool of protest, than getting beat up on the streets. The Internet Revolution of a new sort is starting, and the civilized world could be brought to its knees shortly.

I will tell you the Internet was an amazing gift from a cosmic-interdimensional source; some old geeks back in the 50s got the first alien download that started it all. Humans have always had a tough time controlling new and amazing technologies, and what bought us up, could take us down.

So maybe in 2011 keeping some extra food and water around, a pocketful of cash, and always a full tank of gas could pay off as the world experiences a couple of weeks back in the Stone Age.

Sleep tight – the intensity is ramping up – you will need your rest – 2011 will be a year to remember.