Well here is an interesting, maybe a true, tale of a five-foot hairy bi-pedal running around Albuquerque’s South Valley area. A dozen or so witnesses saw the being and it was always giving out a crying sound like a human baby. It seemed to be looking for something or someone. The few who got close enough said its face was half human, half ape looking.

For you people who are not familiar with Albuquerque’s north and south valleys, they are within the area that the Rio Grande River flows. This area is called the Bosque, an area noted for its strange happenings, an area of beautiful old cottonwoods, assorted brush, and long grasses. There are irrigation channels that are fed by the river. Along these canals/channels there have also been skinwalker sightings for as long as Albuquerque has been here, over 300 years.

A few years ago someone I had met told me an amazing story that happened to him in a community in the Bosque called Corrales. He was driving by himself in his jeep wrangler, going about 40 miles per hour with the doors off and a canvas soft top, when he suddenly had a passenger. Something at 40 miles per hour was able to jump into his vehicle. The driver described the humanoid being as having super white skin, a long crooked nose, and the blackest long hair he had ever seen. The being never looked the driver in the eye except when he jumped out of the moving vehicle, when he turned with a toothless grim and steel cold eyes as if to say thanks for the lift and he was gone; this all took maybe two minutes. The driver said if it had lasted any longer he would have lost control of the jeep from the sheer fright of the event.

So we have a mysterious area here, maybe a vortex area. So let’s speculate on the crying baby being. If it was a vortex area it could have been a child/youth Bigfoot that simply lost its parents. Sasquatch have family units like humans and I have been told that the young ones have been known to cry like human babies even though they were much larger then a typical human baby, much larger. Also since vortexes move around the young BF could have stepped out into our dimension and perhaps could not find its way back. Who knows, but it does sound like these witnesses saw a real anomaly. After being here in Albuquerque for about 8 years I can confirm that the Duke City and the surrounding areas are rich in the “Paranormal.”

Sleep tight – If you hear a baby cry in the distance – ? 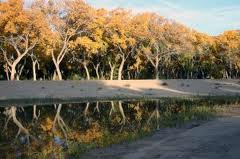