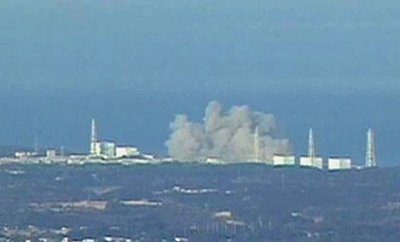 A super earthquake hit Japan followed by a 20-foot plus tsunami and then this huge nuclear disaster. So far we have seen 7 nuclear reactors and fuel pools not presently being cooled properly, 3 meltdowns, and an explosion in a fuel pool. Nuclear disaster planners have stated this is a 1000 times worse than anything they were prepared for.
This disaster at Fukushima nuclear complex will turn out to be one of the greatest disasters in the history of mankind, and the extent of the damage to the Japanese society is just beginning. I recently read a report by scientists, who used modeling from Chernobyl, that projected cancer and cancer death rates will skyrocket over the next 20 years. Everyone within a 200 km radius of the Fukushima complex will be affected one way or another.

The controlling of the information and the cover up by TEPCO and the government’s reluctance to take control of the situation will cause thousands to suffer. Clearly the evacuation area was too small, and the citizens will pay in the future, some with their lives.

Now an interesting development, many of the US monitoring (nuclear detection) stations are down so no new data is being gathered. Why?-no one knows.

Over the last month I have come across an information fighter Arnie Gundersen of Fairewinds.com. He is my new hero, who is making every effort to uncover the truth about this disaster and the impact on all of us. Arnie is a Nuclear Engineer working in and around 70 nuclear reactors around the world; he is truly an expert and is not afraid to speak up and explain his concerns.

I would like to end by quoting Mr. Gundersen, “We knew when the nuclear disaster happened at Three Mile Island, Chernobyl, and Fukushima, but when will they end”?