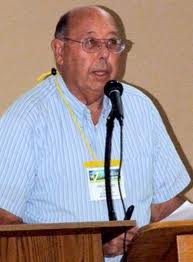 The year was 1947, the month was July, and our government was using a new mobile device, similar to radar, to disrupt the UFO’s navigation system. There were a total of 5 UFOs shot down during the first half of July 1947. This information comes from a man named Chuck Wade, who has studied and done field work in the Corona/Roswell area for over 40 years. Chuck is a native New Mexican, raised in the Corona, NM area and who now lives in Gallup, NM.

The New Mexico UFO/Paranormal Forum had Chuck as a wonderful guest speaker for our May meeting. Chuck is a good-hearted man whose passion is New Mexico UFO crashes. Chuck has a science degree from NM State University and was in the military for 30 years. Chuck has some direct witness testimony of these UFO crashes. And Chuck has material evidence, although it seems to be controversial. I believe with further independent scientific analysis, the evidence will prove to be solid proof of the existence of UFO crashes in New Mexico. And maybe, just maybe proof that the US Military bought these vehicles down, killing most of its occupants. I said most of the occupants, because rumors have speculated that 3 or 4 beings survived the crashes, but all finally died by 1953.

Now the question is, does Chuck have the smoking gun to prove to the world these crashes were a reality here in New Mexico? Time is running out to find any more direct first-line witnesses; they all would be over 80 years old and some 90+, while others have moved away and have no desire to get into the middle of one of the most controversial subjects known to mankind. I do feel there is some more physical evidence out there in the vast semi-arid, semi-wasteland called southern New Mexico. Chuck believes there could be another part of a craft or maybe even a full craft that is wedged deep into a mountain crevice.

Chuck, I hope you find the UFO mother load; you deserve it after spending 50+ years of your personal time researching every possible lead. And as you well know, you have your critics, but you have persevered and have courageously kept moving forward. The time, your time is near, don’t stop now, and thanks for sharing. For there are no secrets worth keeping.

Sleep tight. Sometimes all we think we have left is our courage, but there is more, with courage there is always more.