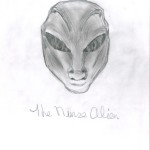 A mysterious summons can go beyond the extraordinary to such a degree that it can make Alice in Wonderland look like a kiddy park excursion. Waking up in a world underwater is about as terrifying as it can get for me but in this instance it was a sparkling metropolis in a humungous dome under the ocean that was beyond enchanting, more awe inspiring in beauty.

I was in a large waiting room of sorts, waiting for my turn to meet the Ambassador from this amazing place, I found myself in. She was a species of human but not from this planet. I found her to be similar to some of the Star Trek aliens that were on various episodes. She had her sister with her and they both looked very similar. They both had long, sandy blonde hair that was pulled back away from their faces. Their foreheads had two ridges along the front that protruded out around from their hairline and eyebrows. Other then this, they looked just as human as you or I.

My memory lapses a bit at this point because I know I talked with the Ambassador but I can’t recall what we talked about. I more remember sitting on a chair next to a man that seemed to be half way sitting on me because he was pretty big in size. I tried to move to let him know he was sitting on me and fortunately for me, he decided to get up and walk away. A little girl walked up to me who seemed very familiar to me. She had golden blonde hair and was around the age of 5 or 6. She had on a sparkly dress that had little golden threads running through it everywhere. She wanted to sit on my lap so I welcomed her up.

As I was asking her how she was doing, a female voice to my left told me to lift up her dress so I could see the sides of her torso. I thought this was an odd request but the little girl told me it was okay. I lifted the skirt part of her dress and saw gills on the side where her rib-cage was. The gills were on both sides so I knew immediately that she could breathe under water. I knew she was a hybrid, part human and part something else. I don’t want to say mermaid but perhaps that was part of what she was. I was told she could breathe in oxygen through her gills underwater. Her timetable for staying underwater without coming up to breath air was around 2 hours. I had the impression they were training her and probably as she got older, she would be able to stay under water for many hours if not days.

I looked up and saw an alien nurse maid standing in front of me. She was talking telepathically to me in my mind. It was at this very moment that she told me to, take her in and remember her face.

The little girl was the daughter of the Ambassador and for some strange reason I knew I was related to them. I always felt the alien nurse maid would come back and tell me more but to this date I have no memory of her ever visiting me again.

The Ambassador and her sister sat up from their chairs, walking towards a doorway and their entourage followed them, including the alien nurse maid and the little girl. As the little girl walked away from me, she turned and waved at me, smiling goodbye. A military woman in uniform came and got me and as I started to walk with her, I saw the Ambassadors entourage leaving in limos. (That’s right, limos under the ocean!)

A group of men from her entourage saw me and a few came over to flirt with me. One of the men wanted me to go with him in his car and I started to laugh at him. At this point the woman who was my military escort said, “Oh, no we don’t.” She then grabbed my arm and took me up some stairs. As the door closed to the room at the top of the stairs, my adventure under the sea ended.