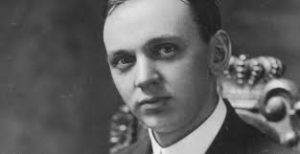 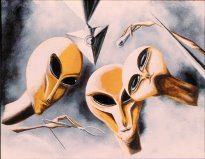 As I get a little older and hopefully a little wiser, I come up with these somewhat profound, or at the very least interesting, conclusions about these beings that have lived among for us (humans) our entire existence on this earth. To the best of what I am seeing, feeling, and hearing, there are primarily four groups in control of this planet during the last 100 years. One group is the Greys. They are a group of 4 to 5 feet tall, a paler white than grey, beings. They also created AI bots (in their own image) that are slightly shorter. The bots obey every command of their masters. They have been responsible for most of the millions of abductions humans endured over the last 60+ years.

Next the taller Grey, Reptoid, also called the Archons, are more emotional than the shorter Greys. They are very much directly involved in human policy and political control, living through the minds of our wonderful politicians worldwide.
Next the mean guys, the Reptilians. Some Reptilians are close to 8ft tall and damn ugly and at times, they are extremely brutal in their ways; all other groups give them space. They will take what they want when they want. They can shape shift into anything or anybody. They want you to know they are in your face and you need to deal with it. Not a happy group. The good news is there is some unknown force that keeps them from totally consuming mankind. I can only speculate this force is maybe human love and fearlessness.

Last, the human hybrids, a small group of beings part alien DNA and human created by the Archons and the Greys. Their purpose, I believe, is to create a new smarter, more durable and less emotional race. The next race to occupy the earth, our present humans have lost their way, destroying the earth. This new R ace will occupy Earth with less than 50 million total beings always in prefect balance.
Finally, the four groups will never appear in public, for it is easier to rule from the shadows. Being a direct occupier causes total chaos, something which would slow or stop their profound agenda and time is running out for us all.

Sleep tight – change is coming, it is what the earth wants and deserves
MWiz. 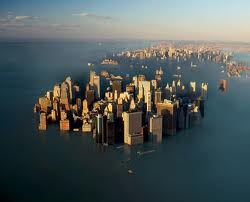 The American Meteorological Society (AMS) recently released their updated position in regards to climate change.
The AMS is clearly making a stronger statement (compared to 2007) in regards to global warming and its cause, saying that the warming of the climate system now is unequivocal.

Some key excerpts from the AMS policy statement……
There is unequivocal evidence that Earth’s lower atmosphere, ocean, and land surface are warming; sea level is rising; and snow cover, mountain glaciers, and Arctic sea ice are shrinking. The dominant cause of the warming since the 1950s is human activities.
Climate is always changing. However, many of the observed changes noted above are beyond what can be explained by the natural variability of the climate. It is clear from extensive scientific evidence that the dominant cause of the rapid change in climate of the past half century is human-induced increases in the amount of atmospheric greenhouse gases, including carbon dioxide (CO2), chlorofluorocarbons, methane, and nitrous oxide. The most important of these over the long term is CO2, whose concentration in the atmosphere is rising principally as a result of fossil-fuel combustion and deforestation.
Future warming of the climate is inevitable for many years due to the greenhouse gases already added to the atmosphere and the heat that has been taken up by the oceans.
In the 21st century, global sea level also will continue to rise although the rise will not be uniform at all locations. With its large mass and high capacity for heat storage, the ocean will continue to slowly warm and thus thermally expand for several centuries. Model simulations project about 27 cm (10 inches) to 71 cm (28 inches) of global sea level rise due to thermal expansion and melting of ice in the 21st century.
Atmospheric water content will increase globally, consistent with warmer temperatures, and consequently the global hydrological cycle will continue to accelerate. For many areas, model simulations suggest there will be a tendency towards more intense rain and snow events separated by longer periods without precipitation. However, changes in precipitation patterns are expected to differ considerably by region and by season. 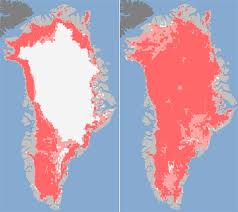 These undated handout images provided by NASA shows the extent of surface melt over Greenland’s ice sheet on July 8, left, and July 12, right. Measurements from three satellites showed that on July 8, about 40 percent of the ice sheet had undergone thawing at or near the surface. In just a few days, the melting had dramatically accelerated and an estimated 97 percent of the ice sheet surface had thawed by July 12. In the image, the areas classified as “probable melt” (light pink) correspond to those sites where at least one satellite detected surface melting. The areas classified as “melt” (dark pink) correspond to sites where two or three satellites detected surface melting. Nearly every part of the massive Greenland ice sheet suddenly and strangely melted a bit this month in a freak event that concerned scientists had never witnessed before. NASA says three different satellites saw what it calls unprecedented melting from July 8 to July 12. Most of the thick ice remains, but what was unusual was the widespread area where some melting occurred. (AP Photo/Nicolo E. DiGirolamo, SSAI/NASA GSFC, and Jesse Allen, NASA Earth ObservatoryBy SETH BORENSTEIN

Even Greenland’s coldest and highest place, Summit station, showed melting. Ice core records show that last happened in 1889 and occurs about once every 150 years.

Three satellites show what NASA calls unprecedented melting of the ice sheet that blankets the island, starting on July 8 and lasting four days. Most of the thick ice remains. While some ice usually melts during the summer, what was unusual was that the melting happened in a flash and over a widespread area.

“You literally had this wave of warm air wash over the Greenland ice sheet and melt it,” NASA ice scientist Tom Wagner said Tuesday.

The ice melt area went from 40 percent of the ice sheet to 97 percent in four days, according to NASA. Until now, the most extensive melt seen by satellites in the past three decades was about 55 percent.

Wagner said researchers don’t know how much of Greenland’s ice melted, but it seems to be freezing again.

“When we see melt in places that we haven’t seen before, at least in a long period of time, it makes you sit up and ask what’s happening?” NASA chief scientist Waleed Abdalati said. It’s a big signal, the meaning of which we’re going to sort out for years to come.”

About the same time, a giant iceberg broke off from the Petermann Glacier in northern Greenland. And the National Snow and Ice Data Center on Tuesday announced that the area filled with Arctic sea ice continues near a record low.

Wagner and other scientists said because this Greenland-wide melting has happened before they can’t yet determine if this is a natural rare event or one triggered by man-made global warming. But they do know that the edges of Greenland’s ice sheets have already been thinning because of climate change.

Summer in Greenland has been freakishly warm so far. That’s because of frequent high pressure systems that have parked over the island, bringing warm clear weather that melts ice and snow, explained University of Georgia climatologist Thomas Mote.

He and others say it’s similar to the high pressure systems that have parked over the American Midwest bringing record-breaking warmth and drought.

Ohio State University ice scientist Jason Box, who returned Tuesday from a three-week visit, said he ditched his cold weather gear for the cotton pants that he normally dons in Nevada.

“It was sunny and warm and all the locals were talking about how sunny it was,” Box said after getting off a plane. “Beyond T-shirt weather.”