(CANVAS STAFF REPORTS) – Theoretical physicist Stephen Hawking has some advice for the people of Earth – it’s time to get off.

“I believe that the long-term future of the human race must be in space,” Hawking said to Big Think , a global forum that includes interviews with experts.

“It will be difficult enough to avoid disaster on planet Earth in the next hundred years, let alone the next thousand, or million. The human race shouldn’t have all its eggs in one basket, or on one planet. Let’s hope we can avoid dropping the basket until we have spread the load.”

The physicist called humankind’s survival “a question of touch and go” and referred to the Cuban Missile Crisis in 1963 as one time people narrowly avoided extinction. He also referred to the 22,600 stockpiled nuclear weapons, including 7,770 still operational, scattered around the planet.

If that doesn’t drive us off, University of Sussex astrophysicist Dr. Robert Smith said global warming may reach a point “where all of Earth’s water will simply evaporate.” He said life will disappear on Earth long before the 7.6 billion years some say the aging sun will expand and destroy Earth.

CNet news said that Hawking has concerns about how humans “are eating up finite resources” and has claimed man’s genetic code “carries selfish and aggressive instincts” that have helped humanity survive in the past.

Hawking suggests that if man can avoid disaster for the next two centuries “our species should be safe as we spread into space.”

According to the Daily Mail , Hawking warned earlier this year that humans should be cautious in trying to contact other alien life forms because there is no way to know if they will be friendly.

“If we are the only intelligent beings in the galaxy we should make sure we survive and continue,” he said.

Vernos Branco, a Las Vegas Sun reader, suggested in a letter to the editor that it may not be that easy to escape. He wrote about how humans have continued to move from one place to another as they settle in an area, use all the resources, pollute the area and move on.

He said now that man has technology that can destroy the environment faster, we are running out of space to live in.

“The planet will be fine and heal; it is man who will vanish,” he wrote. “… If we develop the technology for space travel, we will do the same to that environment, until we learn not to. Man will become extinct due to his greed.”

It may not be that easy anyway to just hop to another planet. University of Michigan astrophysicist Katherine Freese told Big Think that the closest star to Earth is Proxima Centauri. That’s 4.2 light years away, which means man could reach the star in 4.2 years – if man could travel at the speed of light.

At this point man travels at about ten thousandth of light speed, which would make that journey about 50,000 years.

There is also the cosmic radiation danger unless man creates a warp drive or cryogenic freezing technology.

If man can develop the technology needed, she said, man could travel into the future. 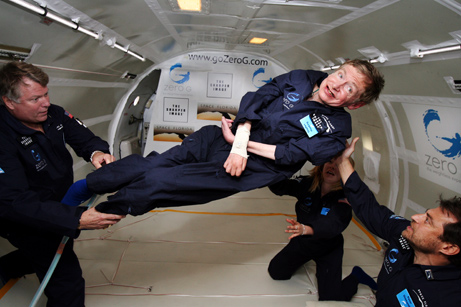