So, this is one of the site’s favorite posting ( see below)– people love Giants – and guess what they are very real, maybe not today – but in the past. If they are still alive they live underground. — check our other post on Giants – Giants Among Us — is it all True Series #401

Nan Madol-
All this is on an island called Pohnpei in Eastern Federated Micronesia. Here there are strange structures built out of basalt stone up to 250 tons, with a combined total weight greater than the Great Pyramid of Giza. All of the small islands that are part of a large lagoon on the east side of the island were artificially made by someone in the distant past. The area to the west of the lagoon has over 800 stone basalt structures that are one story, but 15 feet tall. Can we say, Giants? All of these structures are connected by 85 ft. deep underground caves and corridors. Many of the smaller blocks range from 5 to 50 tons; it seems that these huge stones were quarried on the opposite end of the island.

In a Discovery Channel special in 1995, it was speculated that the huge stones were floated around the island to the building site in bamboo boats. But all attempts to duplicate this feat failed, as the bamboo boats quickly sunk. These structures were built on a coral reef, and it seems that all food and fresh water had to be bought into the island from some kind of outside source.

Under Japanese rule before World War II, it was said that they carried out caskets made of platinum from an underwater location called House of the Dead. During the German occupation, the German governor of the time in the 1900s discovered tombs of 9ft tall Giants. He died that same day.

The Pohnpei people have said that the Giants were the native peoples of the lost continent of Mu. The native people have said that there were three races of Giants: one group was human-like and able to fly, another group was Simian-like and could fly and live under the sea, and finally the Mega Giants were worker drones who lived and worked under the sea as slave-types.
Regarding the huge rocks floating to the other side of the island, in reality, the ships were likely airships that lifted the stones and flew them to the construction sites. Other stories claim this island of strange structures is a weather machine that was activated in 2012. 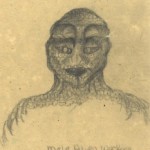