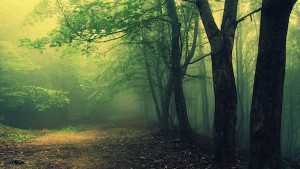 In a place in Romania called Hola Baciu Forest people for years have experienced strange and weird happenings. The forest is about 2500 acres, not so large as forests go, but is packed with paranormal stuff and not for the faint of heart. It’s like the Bermuda Triangle of the woods, with sightings of ghosts, apparitions, orbs, UFOs and visitors getting a creepy feeling and anxiety to leave the area. People who go there get strange physical symptoms like rashes, migraines, dizziness, vomiting, a feeling of being watched and a premonition of death.

There are many stories to be told about this wooded poltergeist. One is a shepherd with two hundred sheep entering the Hola and never returning. Then there was the five year old girl who got lost in the forest never to be seen until five years later, looking unharmed in the same dress she walked into the forest with 5 years before. There are dead vegetation zones scattered throughout the forest. Also people go into the forest and are able to remember forgotten memories of past events, only to forget them again after leaving the Hola.

The Hola Baciu Forest, I believe, is a rare super permanent vortex area, and that is why the faces of the beings there can be photographed. I have been lucky to do the same in vortex areas here in the US. But most of my areas only remain active for a few months, whereas the Hola Forest has been active for years and probably centuries.

I recently had a similar experience driving around the Olympic peninsula in Washington. It was late at night and my girlfriend and I were driving out of Forks, Washington (famous for the Twilight movies) towards Tacoma on Highway 101 along the Pacific Ocean. We were traveling through the Quinault Indian Reservation between Kalaloch Lodge and Queets. Well a bad feeling came over both of us to get out of the area very quickly for something quite bad was going to happen – an ominous feeling. The energy on the road had changed. I felt there were many beings of ill intent watching us and waiting to see if we would stop. Of course, we didn’t stop.

Sleep tight, only the agents of Fear can harm you, so be fearless.
MWiz.