David Paulides wrote a book in 2008 called the Hoopa Project: Bigfoot encounters in California. David, a former law enforcement professionals, is a highly trained interviewer. His interviews among the Hoopa, First Nation may have been a historic first, because of David’s investigative abilities. David also had on his team an excellent forensic artist named, Harvey Pratt. The artwork that Harvey produced, was quite amazing and I would guess a very accurate projection of what the witnesses were telling him.

One of the main findings was, that the Bigfoot witnesses didn’t see the sagittal crest (pointed head), heavy brows, and ape-man “muzzle” features. The witnesses seemed to see what would be considered a more “wild-man” type of being.

My friend researcher, Kewaunee Lapseritis has said for many years that at a minimum there are two types of Bigfoot and maybe more, again the ape-type and the other human type. Also, there may be another one called, an Ancient One. This Ancient One has some features of both other types. On my last mini-expedition with Kewaunee, I was lucky to get a distance photo of an Ancient One.

Reports of this “wild-man” type, go back to the 1800s and were a favorite conversation of lumberjacks and other people who worked out in rural forested areas of North America. If you look at the Patterson/Gimlin film and the photos that have come from it, it truly shows human features, but some ape features also. There have also been interesting reports from Tennessee and Alaska also commenting about these human features. Could this human-type Bigfoot, be our missing link or are we their missing link? It looks like we have common DNA between the two species.

Sleep tight – We will find out someday that Sasquatch is our closest relative in the human life chain and we came from a common ancestor. And I believe this could make us ( humans)  hybrids of the Sasquatch or maybe more like Sasquatch’s evil twins.

I have personally been researching Sasquatch for most of my life, from reading everything I could find on the subject when I was in my teens to intense field research with Kewaunee Lapseritis my friend and amazing Sasquatch Contactee and a man of incredible paranormal abilities.

About 7 years ago I discovered vortex photography by accident on a mini-expedition with Kewaunee. Kewaunee who taken me to a powerful vortex (area of high and low electromagnetic field close together). I started taking random digital photos and low and behold in the first 20 photo there was what I believe was a youth Sasquatch sitting on a fence rail, see photo below. This was a long shot guessing maybe 200 yards or so and remember I didn’t see it when I originally took the photo. 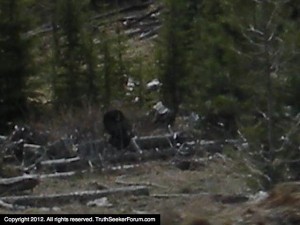 Only after I analyzed the photos back at our lodge did I see the image. I showed it to a local ranger and he said it’s ever one of two things (after he eliminated the bear possibility) a person in the middle of the hot summer with a fur coat on or a Sasquatch. So I believe it’s a Sasquatch sunning him or herself on the fence rail. But you judge, it is still a little blurry and small, but worth the consideration.
Now I have looked at hundreds of Sasquatch photos/ video, some seems very possible, but most of them are hoaxes of the worse degree. I do think the best video/ photo ever is still Patterson/Gimlin back in 1967. I have a close up of the face of the female and it’s amazing and the technology of the time to fake this didn’t exist. And as you know the photos were analyzed by some of the best in the field and they all gave it two thumbs up.

I believe with all the new cameras in circulation around the world now (smart phones, drones etc.) the perfect photo/ video is just around the corner. I must add here , even though Sasquatch is a shy being and doesn’t want to be photographed and is very excellent at hiding or disappearing into another dimension, his/face beautiful face is coming to mainstream media very soon.

Sleep tight, The Sasquatch people are here only to help save our planet, we both have the same earth mother.

If you have not read them yet, go back to my postings from July 21st and July 28th. This Part 3 is my final posting on my 2012 Big Amazing Adventure. Besides the vortex photography, being touched by an Ancient one, and the hooting in the night, two more events on this mini-expedition have produced lasting memories.

First the people of northeastern Washington State were very gracious and accommodating, discussing their pure knowledge of all the strangeness in the forest. Their encounters with these paranormal beings were much more normal than in any other place I have been to do research. These encounters are quite commonplace. It seemed like everyone there has had some type of experience or know some reliable person who has had one or more. Whoever we approached about this subject, they were willing to comment and help add a piece of the puzzle to one of the greatest mysteries in our human history, namely that we live in a multi-dimensional world which is shared by Bigfoot and a host of others beings and that at times they will come out and play.

And lastly as I stood in the middle of the night in the great darkness within this huge beautiful forest a few miles from Canada, it struck me. There were no crickets, no birds, and no small creatures, nothing was making a sound, it was dead silence. You could hear your heartbeat and the neurons in your mind firing. Never have I heard the void, but now I have. It was like hearing “God’s” voice in the vast silence of this magnificent place. So what made this silence so profound was it set up your brain to wait for a sound that would totally imprint itself in your mind, it was truly like being in another dimension, a place where fantasy comes true.

Thank you to my dear friend, Kewaunee, for taking me on this Journey.

Sleep Tight – knowing we are a multi-dimensional world, makes it all worth waking up tomorrow.