Monsanto has been in the news this week, with a U.S. District Court Judge ruling that the USDA has to at least go through the motions of regulating the company’s genetically engineered sugar beets. Monsanto, you may know, is not likely to win any contests for the most popular company. In fact, it has been called the most hated corporation in the world, which is saying something, given the competition from the likes of BP, Halliburton and Goldman Sachs.

This has gotten me thinking about, of all things, ice cream, and of how Monsanto’s clammy paws can be found in some of the most widely selling ice cream brands in the country. These brands could break free from Monsanto’s clutches. So far they haven’t, but maybe this is about to change.

Ben & Jerry’s gets all their milk from dairies that have pledged not to inject their cows with genetically engineered bovine growth hormone (rBGH). Why, then, can’t Haagen Dazs, Breyers and Baskin-Robbins do the same?

Starbucks now guarantees that all their milk, cream and other dairy products are rBGH-free. So do Yoplait and Dannon yogurts, Tillamook cheese, Chipotle restaurants, and many others. But ice cream giants Haagen Dazs, Breyers and Baskin-Robbins continue to use milk from cows injected with rBGH, a hormone that’s been banned in Canada, New Zealand, Japan, Australia and all 27 nations of the European Union. As if to add insult to injury, Haagen Dazs and Breyers have the audacity to tell us, right on the label, that their ice cream is ” All Natural.”

We have Monsanto to thank for rBGH. Monsanto developed the artificial hormone and marketed it aggressively for years, before selling it in 2008 to Elanco, a division of the Eli Lilly drug company. Of course, Monsanto (and now Elanco) wants us to think the hormone is in every way completely satisfactory and safe. Monsanto’s party line has consistently been that there is “no significant difference” in the milk derived from cows who have been dosed with the hormone compared to those who haven’t.

Pardon me for not swallowing Monsanto’s hooey, but if that’s so, why have so many countries outlawed rBGH? Are these countries all run by ignorant Luddites who oppose technology and progress? Or might there actually be compelling reasons?

There are, indeed. One of them is that injecting the genetically engineered hormone into cows increases the levels of a substance called IGF-1 in their milk. Monsanto’s own studies found that the amount of IGF-1 in milk more than doubled when cows were injected with rBGH. Studies by independent researchers show gains as much as six-fold. (Scientific citations in support of the statements in this article can be found here.)

Does it matter whether there are excess levels of IGF-1 in milk? It decidedly did to the European Commission’s authoritative international 16-member scientific committee. Their report said the excessive levels of IGF-1 found in the milk of cows injected with rBGH may pose serious risks of breast, colon and prostate cancer.

How serious is the increased risk? According to an article in the May 9, 1998 issue of the medical journal The Lancet, pre-menopausal women with even moderately elevated blood levels of IGF-1 are up to seven times more likely to develop breast cancer than women with lower levels.

As if these risks to human health weren’t enough reason for nations to prohibit the use of rBGH, there are more. The artificial hormone is also notorious for causing the cows much pain and distress. It does this by increasing painful and debilitating diseases like lameness and mastitis in cows who are injected with it. And because it increases udder infections in cows, it has greatly increased the use of antibiotics in the U.S. dairy industry. If you wanted to design a system to breed antibiotic-resistant bacteria, you’d be hard pressed to do better.

Does the increase in udder infections have an effect on the milk, and thus any ice cream, cheese or other product made from it? Most definitely, according to Dr. Richard Burroughs, a veterinarian deeply familiar with rBGH. “It results in an increase of white blood cells,” he says, “which means there’s pus in the milk!” The antibiotic use, he adds, “leaves residues in the milk. It’s all very serious.”

How, then, was such a dubious and tainted product ever approved for use in the U.S.? The answer provides a glimpse of how successful Monsanto’s efforts have been to exert control over our nation’s food policies.

By all accounts, the FDA’s 1993 decision to allow the use of rBGH was one of the most controversial in the agency’s history. Made amid widespread criticism from scientists, government leaders and farmers, including many researchers and officials inside the FDA, the decision was overseen by Michael R. Taylor, the FDA’s Deputy Commissioner of Policy from 1991-1994.

Was Taylor unbiased? Prior to holding that position, he was an attorney at King & Spaulding, Monsanto’s law firm, where he presided over the firm’s “food and drug law” practice. After the decision was made which gave the green light to rBGH, he left the FDA and resumed working directly for Monsanto, as vice president and chief lobbyist.

How significant was Taylor’s role in getting rBGH approved? As of August 15, 2010, his Wikipedia entry said that he “has long been hostile to food safety,” and “is widely credited with ushering recombinant bovine growth hormone (rBGH) through the FDA regulatory process and into the milk supply — unlabeled.” (This statement was removed from Wikipedia immediately after I referred to it in a comment following an article I wrote last week for The Huffington Post on the topic. Apparently, if you can get your people in and out of key positions at the FDA, messing with Wikipedia is a piece of cake.)

Congressman Bernie Sanders was specifically referring to Taylor when he said “the FDA allowed corporate influence to run rampant in its approval of BGH.” Documentaries including “The World According to Monsanto” and “The Future of Food” present Taylor’s pro-Monsanto actions at the FDA as a dramatic example of the how corporate influence has exerted massive control over the FDA. Today, Taylor again works for the FDA, now as Deputy Commissioner of Foods.

Things have taken a different turn in Canada, but not for want of effort on the part of Monsanto. During Canada’s scientific review of Monsanto’s application for approval of rBGH, Canadian health officials said Monsanto tried to bribe them, and government scientists testified that they were being pressured by higher-ups to approve rBGH against their better scientific judgment. But in 1999, after eight years of study, Canadian health authorities rejected Monsanto’s application for approval of rBGH.

In the U.S. today, Monsanto continues to wield massive influence over U.S. food policies. In spite of, or perhaps in response to, Monsanto’s toxic and tenacious grip on our nation’s food policy, a movement is afoot. Every day more and more people are refusing to buy ice cream and other dairy products made with rBGH. And every day another organization adds its name to the growing list of groups campaigning against Monsanto’s influence, and calling for the FDA decision allowing the use of rBGH to be revoked.

At this very moment, the plucky Oregon chapter of Physicians for Social Responsibility (PSR) is leading a nationwide effort to persuade Breyers (whose brands include Good Humor, Klondike Bars and Popsicle), and Dreyer’s (whose brands include Haagen Dazs, Nestle and Edy’s) to go rBGH-free. The campaign focuses on Breyers and Dreyer’s because they are the two largest ice cream producers in the country today.

If you want to strike a blow against Monsanto’s efforts to control the world food supply, you can follow me on Twitter, post this article to your facebook page, spread the word and get engaged.

Monsanto and its allies have a grand vision. They are intent on controlling the world’s food supply. Don’t let them. And don’t let them cram their genetically engineered products down your throat. Even in a product as tempting and sweet as ice cream, that’s no treat.

John Robbins is the only son of Irvine Robbins, the co-founder and co-owner of Baskin-Robbins, and was groomed by his father to run what was at one time the world’s largest ice cream company. But John walked away from the company and the wealth it represented in order to advocate for a healthier and more compassionate way of life. To learn more about his journey along his own “rocky road,” see The New Good Life: Living Better Than Ever in an Age of Less. John is also the author of The Food Revolution, Diet for a New America and six other books. For more info, see johnrobbins.info 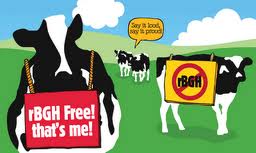