I believe again — the Mars Folks want — no probing 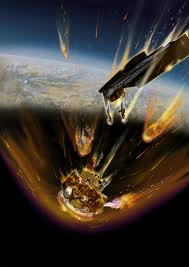 From Scientific American
Although it can be tough for observers in the West to vet such claims from the Russians, fears that Phobos-Grunt’s fall would cause dangerous chemicals to rain from the sky are probably unfounded, experts say
By Mike Wall and SPACE.com
Experts predicted correctly that Russia’s failed Mars probe Phobos-Grunt would crash back to Earth in mid-January 2012. This artist’s concept shows fuel burning from a ruptured fuel tank as the spacecraft reenters the atmosphere.

A failed Russian Mars probe came crashing back to Earth Sunday (Jan. 15) in a death plunge over the Pacific Ocean, according to Russian news reports.

After languishing in Earth orbit for more than two months, the 14.5-ton Phobos-Grunt spacecraft fell at around 12:45 p.m. EST (1745 GMT) Sunday, apparently slamming into the atmosphere over an empty stretch of the Pacific, Russian officials told the Ria Novosti news agency.

“Phobos-Grunt fragments have crashed down in the Pacific Ocean,” Alexei Zolotukhin, an official with Russia’s Defense Ministry, was quoted by Ria Novosti as saying. Zolotukhin said that the spacecraft crashed about 776 miles (1,250 kilometers) west of the island of Wellington, the news agency reported.

Before the crash, Russia’s Federal Space Agency, known as Roscosmos, released a map that estimated a potential crash zone in the middle of the Atlantic Ocean sometime between 12:50 p.m. and 1:34 p.m. EST (1750-1834 GMT) on Sunday.

The huge probe likely broke apart as it re-entered, with the vast majority of the pieces burning up in the atmosphere, but some big componets were expected to survive the fiery fall. At the moment, it’s not clear how many chunks of Phobos-Grunt survived, or exactly where this hail of hardy debris touched down.

Roscosmos had estimated that 20 to 30 chunks of Phobos-Grunt, weighing a total of no more than 440 pounds (200 kilograms), might hit the Earth’s surface. Officials also stressed that the probe’s huge reservoir of toxic fuel would burn up high over Earth. [Photos of the Phobos-Grunt mission]

While it can be tough for observers in the West to vet such claims from the Russians, fears that Phobos-Grunt’s fall would cause dangerous chemicals to rain from the sky are probably unfounded, experts say.

“They did acknowledge early on that the [fuel] tanks are made of aluminum,” Nick Johnson, chief scientist of NASA’s Orbital Debris Program Office at the Johnson Space Center in Houston, told SPACE.com. “Aluminum rarely survives re-entry, so there’s no reason to really doubt them.”

Russian officials have also repeatedly stated that there’s little danger of contamination from a tiny amount of radioactive material onboard Phobos-Grunt, about 10 micrograms of Cobalt-57 that forms part of a science instrument on the craft.

The crash marked a dramatic end to Phobos-Grunt’s brief and troubled life. The $165 million probe launched Nov. 8 on a mission to collect soil samples from the Martian moon Phobos and send them back to Earth in a return capsule (“grunt” means “soil” in Russian).

Phobos-Grunt’s main engines were supposed to fire shortly after liftoff to send the spacecraft on its way to the Red Planet. That never happened, however, and the probe got stuck in Earth orbit.

Russian officials still aren’t sure what went wrong. They hinted recently that some form of sabotage may be responsible for Phobos-Grunt’s problems, and perhaps for the other four embarrassing space failures Russia suffered in 2011 as well.

Phobos-Grunt was also carrying China’s first attempt at a Mars orbiter, along with an experiment run by the United States-based Planetary Society designed to study how a long journey through deep space affects micro-organisms.