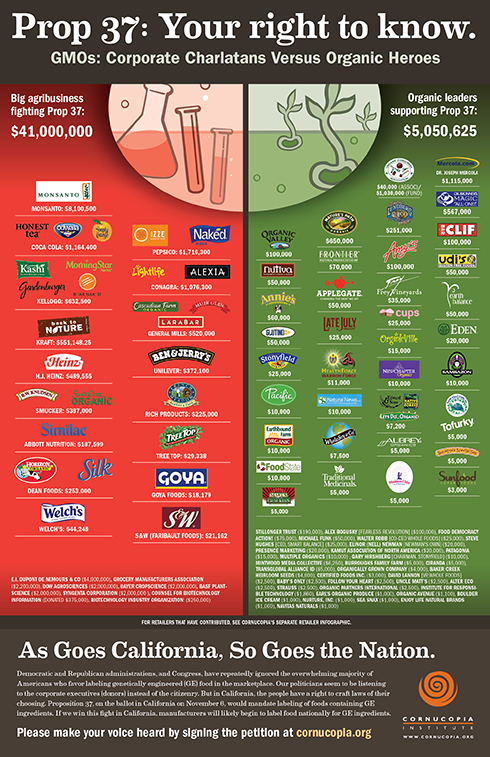 We all know that labeling genetically engineered foods is a common sense right that is enjoyed by over 50 other countries, including China, India, and Russia.

But for Americans, that right has been taken away from us. The chemical companies and the junk food companies have done everything possible to hide the truth from Americans for the sake of their profits.

I knew going into this battle, that it would be a significant challenge and risk to me personally. You see, when you fight against major chemical companies like Monsanto, you’re sure to get a little dirty along the way.

The processed food and chemical companies have paid over $40 million to hide the science experiment that has secretly ended up on the dinner plates of hundreds of millions of unknowing Americans. These multinational corporations are worried, and will do anything to keep you in the dark.

Keep in mind that the top six funders of “No on 37” are also the six largest pesticide companies in the world! That alone should tell you that their stance has nothing to do with your health and well-being.

This was just one of the ads that Monsanto & company have been sending voters to discredit me with lies. This is no surprise, considering how many people – inlcuding farmers, Monsanto has attacked in the past.

False Claims and Misrepresentations Used to Mislead Voters
The “No on 37” campaign has been caught misinforming voters again and again over the past several months. For example, on October 18, the “California Right to Know Yes on 37” campaign requested the U.S. Department of Justice conduct a criminal investigation of the “No on 37” campaign “for possible fraudulent misuse of the official seal of the U.S. Food and Drug Administration.” According to the press release:1

“The Justice Department should investigate this fraudulent dirty trick perpetrated by the ‘No on 37’ campaign,” said Gary Ruskin, campaign manager of ‘California Right to Know Yes on 37’. “They are running a campaign of lies, deceit and trickery, and some of it may be criminal.”

The ‘No on 37’ campaign affixed the FDA’s seal to one of the campaign’s mailers. Section 506 of the U.S. Criminal Code states: “Whoever… knowingly uses, affixes, or impresses any such fraudulently made, forged, counterfeited, mutilated, or altered seal or facsimile thereof to or upon any certificate, instrument, commission, document, or paper of any description… shall be fined under this title, or imprisoned not more than 5 years, or both.”

The letter also provides evidence that the ‘No on 37’ campaign falsely attributed a direct quote to the FDA in the campaign mailer. The quoted attribution, which appears below, is entirely false and fabricated. The FDA did not make this statement and does not take a position on Prop 37.”

Other unethical transgressions employed to confuse voters who are still on the fence include:

•The repeated misrepresentation of their lead spokesman, the long-time front man for the tobacco industry, Dr. Miller. In campaign advertisements, Dr. Miller has been presented as being affiliated with Stanford University, when in fact he has NO such affiliation. The misrepresentation is in direct violation of the University’s policy, and when Stanford learned about the false use of its name, they demanded that the ‘No on 37’ campaign change the ad.
•According to the Academy of Nutrition and Dietetics (the world’s largest organization for food and nutrition professionals), No on 37 misled the public about the Academy’s stance on genetically engineered foods in the Secretary of State’s Official California Voter Information Guide. The press release2 issued by the Academy reads in part:
“…the California Official Voter Information Guide regarding Proposition 37… inaccurately states that the Academy ‘has concluded that biotech foods are safe.’ The statement is false… We are concerned that California voters are being misled… Voters need accurate information in order to make an informed choice.”

Fuzzy Logic Used to Confuse You on the Basic Issues
The anti-choice campaign likes to claim that Prop 37 was written by trial lawyers in order to hit small grocers and growers with lawsuits. The truth is that the “Yes on Prop 37” is a grassroots effort, started by a concerned California grandmother who saw that there was no way of avoiding genetically engineered foods even if we wanted to, since they didn’t have to be labeled.

The labeling campaign is about having the right to know what’s in your food – just like you’re informed about the nutritional content, and the presence of peanuts (important for those with allergies) and other food additives. Whether genetically engineered ingredients are good or bad for your health is really beside the point. Aspartame is not good for you, yet it’s on the label, and people have the right to consume it as they please. That’s all this is about – just state what it is on the label.

The Monsanto campaign claims Prop 37 is “anti-science” and would ban safe foods. This is nonsense, as Prop 37 doesn’t ban anything. It simply requires the label to state whether the food contains genetically engineered ingredients or not. You’re still free to sell it and buy it.

The only thing it prohibits is the mislabeling of GE foods as “all natural,” a term that many tend to associate with more organic standards – which GE crops cannot comply with. You’re currently paying a premium for “all-natural” foods that actually use GE ingredients, thinking you’re getting something better than conventional! THAT’S hurting your wallet. Accurately labeling these foods will not.

As for their argument that genetically engineered foods have been around for many years without health problems, this is another nonsensical claim, as there’s no way of tracing any potential health problems back to the food without labelling! The potential truthfulness of their claim in fact hinges on GE foods remaining unlabeled. Without labeling there’s simply no way to know, because there’s no way to track or trace side effects like people can now do with aspartame, or any other food allergy.

These crops are not fit to feed cattle, much less humans. How can anyone ignore the fact these companies are producing products that are devastating human health while monopolizing our entire agriculture and food system?

The junk food grocery association has indicated Prop 37 is their #1 initiative to stop, and they are spending tens of millions to prove it. You’d think if they would be using genetically engineered foods to save the starving people around the world, labeling them should be a great way to advertise. So why do they want to prevent labeling genetically engineered foods so badly?

The LA Times has just reported the “Yes On 37” campaign still narrowly leads in the polls 44 percent to 42 percent.

We are at the crossroads and a win is within reach, but we cannot ignore the fact these chemical companies are buying votes with tens of millions of dollars by spreading lies.

So now is the time for the final push to win the Right To Know Genetically Engineered Foods by simply labeling them like over 50 other countries around the world including Russia and China.

We need to reach many Americans who don’t know these genetically engineered foods have been introduced into our food supply.

Our message is simple, just like Prop 37. A few words on a label to inform consumers if products contain genetically engineered ingredients. Let’s allow consumers to decide, and not the chemical companies or junk food industry.